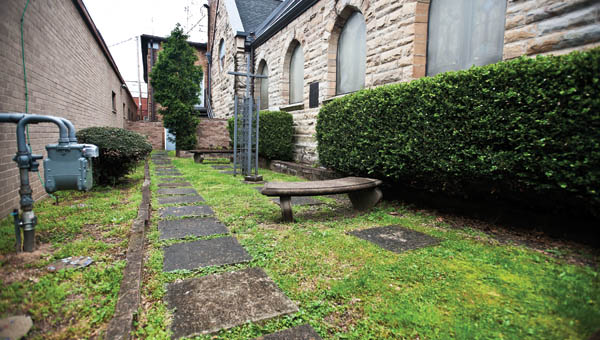 Adding another pocket park to the city of Ironton is the goal of Christ Episcopal Church as it works on transforming its church garden.

The church’s congregation is considering plans created by Bob Hurley of Wheelersburg that would turn the grassy areas now in the garden into paving.

Part of the paving would have the design of three circles signifying the trinity.

The rest would be planted in ground cover, small trees and azaleas. There would be benches.

Ironton In Bloom volunteers want to create pocket parks in the downtown area, including one at Memorial Hall, as rest areas for proposed walking trails. IIB was recently given a line item in the city budget of $3,000 as part of a citywide project.

Recently IIB teamed up with Our Lady of Bellefonte Hospital and Sun Coke to plant linden trees at Memorial Hall and on Railroad Street for its annual Arbor Day celebration.

In the past four years IIB has planted 17 trees, including those down Center Street.

“It is important for the church to create a place of quiet and solitude in the midst of downtown,” the Rev. Sallie Schisler of Christ Episcopal, said.

Schisler also said creating the pocket would augment the work of IIB.

“Part of the church’s mission is to create a sacred space,” she said.

The former Whitwell Elementary School on South Fifth Street will be the topic of tonight’s planning commission meeting as owner... read more