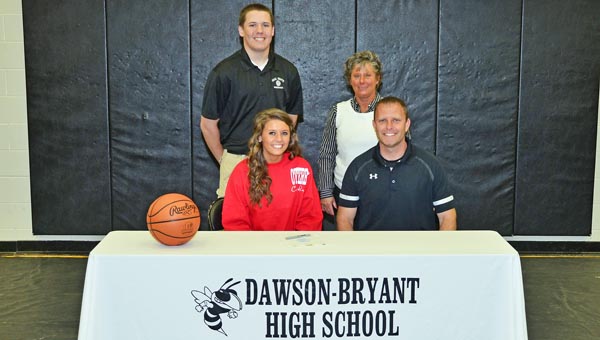 COAL GROVE — Knowing what a point guard has to do, it was easy for Jacy Jones to point herself in the right direction.

Jones knows she is a true point guard and she found the right fit when she signed on Friday to play at Otterbein University.

Jones played point guard for the Coal Grove Lady Hornets the past four years but also had to serve as a shooting guard and rebounder.

Jones talked with Capital, Defiance, Wilmington and Marietta before settling on Otterbein.

“When I went to Otterbein I found home, a place away from home. It was like the best fit for me,” said Jones.

“I’m nervous and excited. If I had stopped (playing) after high school I would have regretted it a lot. I want to go and keep it up for four more years.”

She averaged 19 points a game and four assists, but she also led the team with a 7.0 rebound average and had 560 career rebounds. She finished her career with 1,221 points.

“Jacy has meant more to the program than what people can fathom,” said Lady Hornets’ coach Rick Roach. “She’s a 1,000-point scorer, 500-rebounder, and this season she led in just about every category we had.

“Her authority on and off the court was a huge impact for the younger kids coming in. She’s such a great role model. That’s the biggest thing to get past is having that leader that’s able to take charge of those kids and get them gathered up whenever the coach can’t do it. I wish her the best.”

The Cardinals had 11 guards on their roster last season but three were seniors including the only point guard.

Otterbein head coach Connie Richardson is the winningest women’s head basketball coach in school history during her 24-year tenure with more than 300 victories. She sees Jones as a point guard but won’t restrict her to one spot.

“We’re excited to have her. This will be a good experience for her. We lost three seniors guards and we have to see who we can plug in,” said Richardson.

With excellent speed, ball-handling skills and the ability to shoot from the perimeter, Jones is capable of playing several guard positions.

“Everybody needs to have that kid. We average 77 points a game. I want to go right at them with my transition. I don’t want to set up,” said Richardson.

“Our backup point guard isn’t really a point guard so Jacy fits in pretty well. We need to bring in a couple (of guards) at that position. In my system you always have to have a point guard on the floor. I like to have ones who can plug in and go.”

Richardson said the two biggest adjustments for players stepping up to the next level are the speed of the game and the weight room.

“She’ll be fine. We’re excited to have her. This will be a good experience for her. We lost three seniors guards and we have to see whom we can plug in,” said Richardson.

Jones thinks she will be able to make the jump to the next level.

Roach said Richardson saw Jones in game action and talked with her about the role she could play for the Lady Cardinals.

“I hope she can go up there and have an impact on them like she did on us. I think she can and I think she will,” said Roach.

“I told coach Richardson this would be a good opportunity to display her skills of an actual point guard. You’ll see her assists increase tremendously. She won’t score as much as she is accustomed but she’ll still be one of those kids who you have to respect her shot and getting to the basket.”

Jacy is the daughter of Janet Jones — a teacher in the Coal Grove schools — and the late John Jones, a former teacher and coach for Coal Grove.

She admits teaching is in her blood and she plans to major in early childhood education.

“I’ve been wanting to be a teacher my whole life since I was in kindergarten so I think I’m going to stick to that,” said Jacy. “(My parents) were both teachers so that pushed a lot (of influence) to be a teacher, too.

“My whole family is. My cousin is just now graduating from Morehead and she’s going to be a teacher and my brother (Jeb) is thinking about being a Math teacher, and my aunt was a teacher.”