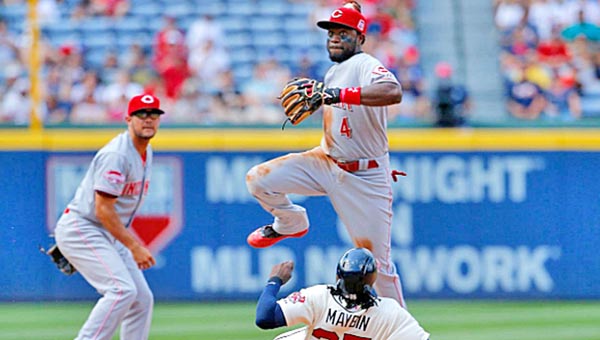 Cincinnati second baseman Brandon Phillips turns a double play in the sixth inning of Sunday’s game against the Atlanta Braves. The Reds lost 5-0. (Courtesy of The Cincinnati Reds.com)

ATLANTA (AP) — Things got away from Johnny Cueto early, and the Cincinnati Reds were never able to catch up.

The Reds ace was roughed up in the first three innings as the Braves cruised to a 5-0 win Sunday for a split of the four-game series.

“It was just a bad outing,” Cueto said through a translator. “The pitches stayed up. They hit me well.”

Kelly Johnson and Jonny Gomes hit home runs for the Braves and Andrelton Simmons, Freddie Freeman and Christian Bethancourt all had doubles.

“If you would have told me we’d score five runs against Johnny Cueto, and he would only go six innings, I’m may have stopped and got some Lotto tickets,” Braves manager Fredi Gonzalez said. “He’s tough.”

Teheran struck out five in a row during one point and fanned a season-high six overall.

“He pitched a nice ballgame and never really gave us anything,” Reds manager Bryan Price said. “He just really shut us down.”

Teheran was never threatened after the Braves built an early 4-0 lead. He walked two.

Cody Martin, Michael Kohn and Luis Avilan combined for three innings of one-hit relief as the Braves recorded their second shutout of the season.

Reds shortstop Zack Cozart left the game in the fourth when he bruised his right index finger fielding a grounder by Teheran. He was charged with an error. X-rays were negative.

Cueto escaped a bases-loaded jam in the second, but surrendered a solo home run to Gomes in the third. Freeman, Jace Peterson and Johnson also hit flyballs to the center field warning track in the first three innings.

Cameron Maybin added an RBI single in the sixth inning after Cueto balked Peterson to second base.

Reds: RHP Jason Marquis showed no ill effects the day after taking a line drive off his right forearm. Price said he expects Marquis to make his next start.

Reds: The Reds have an off-day on Monday and will open a three-game series at Pittsburgh on Tuesday. It will be the fifth game of a 10-day road trip. Rookie Michael Lorenzen (0-1) will make his second career start after going five innings in his major league debut an 8-3 loss to the Brewers in which he allowed three runs.

After enjoying a stellar first three games in the series during which he was 6 for 13 with a home run, Cozart had a tough finale. Prior to leaving the game with a bruised finger, Cozart was hit on the wrist by Teheran’s fastball in the first inning and grounded out in his only other at-bat before leaving.