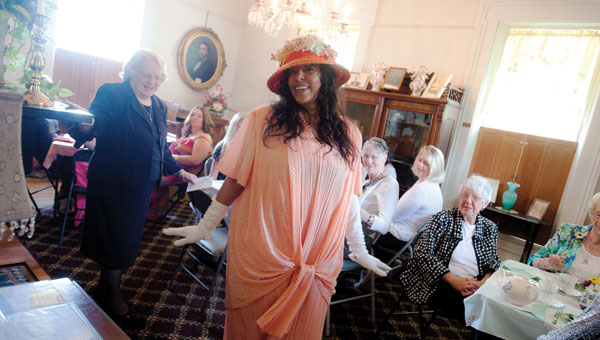 Jackie DuFore shows off a dress that a woman living in the 1920s would have worn on Saturday during the Garden Party Tea event at the Lawrence County Museum.

Derby Day finery had nothing on those attending the Garden Party Tea at the Lawrence County Museum.

Straw hats were everywhere with feathers, flowers and bows.

The tea is an annual fundraiser for the Lawrence County Historical Society, which also hosts one in December.

In the kitchen of the Gray Mansion on Sixth Street were Peggy Karshner, Gail Webb, Sue Jenkins and Alicia Fraley putting on the final touches to the menu.

A four-course tea was offered of spinach-strawberry salad, strawberry and brown sugar pecan scones, finger sandwiches of chicken croissant, ham crostini, tomato and cheese and cucumber. Dessert was Tuscan grape delight of sliced white grapes in a confection of whipped cream and cream cheese topped with a candy crust.

The tea served throughout was a creation of Karshner called Bavarian Berry, made up of black tea mixed with blackberry, blueberry and strawberry teas.

As guests dined, a fashion show of vintage clothes were modeled by volunteers and area students.

Senior Citizen Day is May 19

Senior citizens of Lawrence County will be able to get together for activities, games, prizes and more at this year’s... read more