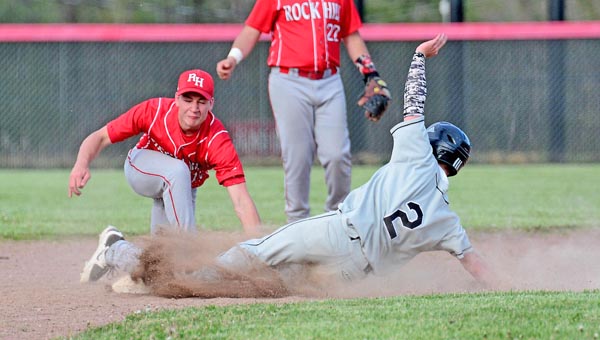 PEDRO — Daniel Rutherford knows what a strike is, but he must have forgotten what a ball is.

Rutherford fired a two-hitter as he struck out 11 and did not walk a batter in the Coal Grove Hornets 6-0 shutout of the Rock Hill Redmen on Monday in an Ohio Valley Conference game.

“Rutherford threw well and located well. He didn’t go full count on anyone and he didn’t throw more than two balls to anyone,” said Hornets’ coach Dean Mader.

“He struck out 11 and that can cause your defense to relax, but we stayed focused and made the plays and turned two more double plays.”

Chesapeake downed Fairland 12-2 to gain at least a tie for the league crown. The Panthers need a win or Hornets’ loss to claim the title outright.

After a non-league game at Fairview, Ky., on Wednesday, the Hornets finish the week against Ironton and Fairland.

Coal Grove got a run in the second as Sean Paulus reached on error, went to third on a throwing error and came home on Dylan Malone’s base hit.

Jacob Clark doubled and came home when Rutherford reached on an error. Jesse Rigsby singled and pinch-runner Jacob Myers came home on a passed ball Clark. Paulus was safe on an error for a run and Chase McKnight singled to score the final run.

The Hornets got an insurance run with two outs in the seventh when Rigsby singled and Jacob Pierce doubled.

Sean McFann threw well in defeat for the Redmen. In six innings, he gave up five hits, struck out five and walked just one.

Corey Noel went 2-for-3 for both Rock Hill hits.

Jackie DuFore shows off a dress that a woman living in the 1920s would have worn on Saturday during the... read more