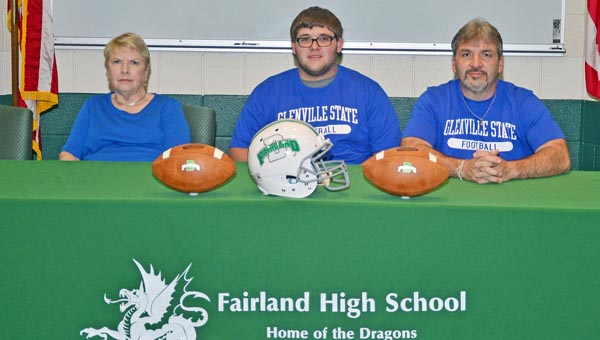 PROCTORVILLE — There was always a burning question inside Zach McKinney

That question was answered after he signed with Glenville State on Tuesday.

Now the Fairland Dragons’ senior lineman believes he can take that fulfilled dream another step.

“If I work hard I think I can do just a good as I want to and play as much as I want if I push myself far enough,” said McKinney.

McKinney said he isn’t certain what plans Glenville’s coaching staff has for him.

“I don’t know what they are going to do,” said McKinney. “I think they wanted me to play more defense is what it sounded like, probably a defensive end or middle linebacker. It’ll probably be something along those lines.”

McKinney talked with Morehead State and even had some discussion with Marshall, but he noted that “there probably wouldn’t have been much playing time.”

Part of the drawback at the higher level is the fact McKinney is 6-foot tall instead of between 6-4 and 6-8 like most colleges prefer.

McKinney weighs 270 pounds but he understands that he’ll need to lose weight and then hit the weights.

“I’m sure they’ll want me to slim down a lot. They’ll want my weight to be more bulk,” said McKinney.

By signing with Glenville State, McKinney will be re-united with fellow senior Tyler Campbell who signed with the Pioneers last week and the Dragons’ 2014 former head coach Rashad Jackson.

“It’ll make me feel at ease more knowing that there are people there that I know that I can talk to if I need to,” said McKinney.

Having Campbell and Jackson there is a bonus, but McKinney said there were other key factors besides a bigger opportunity to play.

“It seems like a smaller school and it looks like it would be more fun than going to something bigger. This gives me more of an opportunity and that’s what I like about it,” said McKinney.

The Dragons won the Ohio Valley Conference and made the playoffs two years ago but were 2-8 last season. He said there was positive experiences from both seasons.

“It’s been a rollercoaster really. We’ve gone back and forth,” said McKinney. “Good years, bad years, different coaches, different experiences. A lot of learning, actually. I think what I’ve learned the past couple of will help me a lot. How to play, what to look for and what to do in terms of techniques.”

Zach is the son of J.C. McKinney.