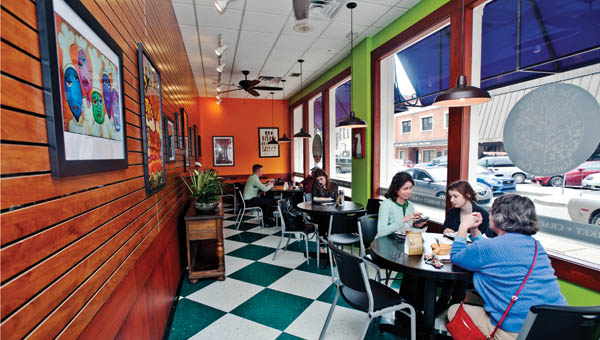 Both chefs, Beckett was in Atlanta doing such jazzy things like cooking for the Olympic Village. Ballard was headquartered in Florida, though every so often she would come back to visit family.

“It was so sad to come downtown,” Ballard said. “Everything was abandoned. It was like a ghost town.”

Independently, the pair decided coming back home was the best decision at that time for each.

“I moved back here three years ago and things downtown had started happening,” she said. “I saw downtown was coming alive. There was a strong feeling about shopping locally. I wanted to be a part of it.

“If we started a business, it would be food-oriented. It occurred to us what does downtown need for the people who move downtown. It needed something. More and more people were moving downtown.”

Then like all good success stories, serendipity played its hand when Ballard discovered the corner building on Fourth Avenue and Ninth Street could be theirs.

“This space. I always thought this was a beautiful space with the windows,” she said. “I said, ‘I know what would be awesome here.’”

And the Bodega was born.

Chalk murals in funky pinks, purples like “Drink Good Beer with Good Friends” line the back wall of the café that leads to an upscale market where banana bread English muffins, Amish butter and cage-free chickens can be found.

“These are the colors I like,” Ballard said. “I wanted the colors to represent fresh foods, tropical colors and it reminds me of my Florida home.”

“It is back to people being interested in what goes into their body,” she said.

That’s why the Bodega has reached out to the Wild Ramp, a year-round market that offers local meat and produce vendors an avenue for their wares.

“They have put us in touch with people so we can be an outlet for local farmers,” she said. “I’m excited about the local produce.”

That love of seasonal produce filters down to the sandwich menu that will change every few months. Right now that sandwich menu offers country ham, fresh asparagus topped with brie cheese. Pot roast with smoke gouda. Ham and Swiss cheese with apple and fig jam. Or Portobello schrooms with boursin cheese and caramelized onions.

“I want something with unique flavor combinations,” Ballard said. “It’s not a sandwich you can walk into any place and get.”

When Bodega patrons got word that the menu was seasonal, there were some cries of dismay.

“Maybe you will love the new No. 3,” she would respond.

Although the Bodega has only been opened a few months, Ballard and Beckett say they are thrilled with the public’s response.

“The Tri-State has embraced us,” Ballard said. “We are having a lot of fun and we are absolutely humbled on how we have been accepted.”

Boil water advisory for residents from Washington Street to north end of Ironton has been lifted. read more