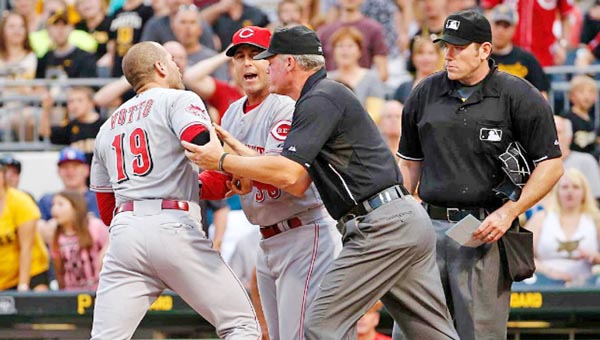 Cincinnati’s Joey Votto (19) is restrained by third base umpire Ted Barrett and Reds’ manager Bryan Price while arguing with home plate umpire Chris Conroy after being ejected in the third inning of Wednesday’s game. (Courtesy of The Cincinnati Reds.com)

Leake worked eight innings for his sixth straight victory over the Bucs and Marlon Byrd homered for the second game in a row as the Cincinnati Reds beat the skidding Pirates 3-0 on Wednesday night.

Leake (2-1) allowed six hits and has not lost to the Pirates in 15 starts, dating to 2012. He struck out two, had no walks and also had an RBI double for the 71st hit of his six-year career.

“I think the more familiar you are with the opposing hitters as a pitcher, you learn their weaknesses and how to exploit them,” Leake said.

“Once that happens, it’s a matter of executing pitches and I’ve been able to do that against them.

“Tonight, the plan was just get ahead in the count and get them to hit the ball on the ground.”

The Reds’ Brandon Phillips had three singles, including one that hugged the third-base line in the fourth inning and scored Todd Frazier, who had tripled, with the game’s first run.

Phillips scored on Leake’s double, then Byrd led off the fifth inning with his fifth home run of the season.

Aroldis Chapman pitched a scoreless ninth for his sixth save, finishing the seven-hitter.

April’s NL Pitcher of the Month Gerrit Cole (4-1) lost his first start in May, and the Pirates lost their fifth straight game. Cole surrendered three runs and eight hits in five innings.

Rookie shortstop Jung Ho Kang had two hits, but the Pirates lost for the seventh time in eight games. They have scored seven runs in those losses while going 3-for-37 with runners in scoring position.

“We’ve seen (Leake) a bunch and when he’s good he’s sinking the ball and changing speeds,” Hurdle said. “We hit 14 (groundouts) to the pull side and that’s exactly what he was trying to get us to do.”

Reds first baseman Joey Votto was ejected and then made contact with home plate umpire Chris Conroy after striking out to end the third inning.

Votto flung his bat and helmet to the ground then said something to Conroy as he walked to his position and was tossed.

Votto charged toward Conroy and the two bumped chests before Reds manager Bryan Price could intervene.

Making contact with an umpire often results in discipline from Major League Baseball such as a suspension and fine.

Reds: SS Zack Cozart missed his second straight game after starting all of the first 25. Though his bruised right index finger has healed, he is still feeling pain in his right wrist from being hit by a pitch on Sunday in a loss at Atlanta.

Pirates: OF Andrew Lambo was placed on the 15-day disabled list with plantar fasciitis in his left foot, and the contract of utility player Steve Lombardozzi was purchased from Triple-A Indianapolis. Lambo, who is just 1 for 25 (.040) in 20 games, had his foot placed in a walking boot. Lombardozzi’s .379 batting average in 24 games was second in the International League.

Reds: RHP Anthony DeSclafani (2-0) will start Thursday night in the finale of the three-game series. His 26 strikeouts lead NL rookies.

Pirates: RHP A.J. Burnett (0-1) has allowed one run or less in four straight starts for the first time in his 17-year career but is winless despite a 1.45 ERA that is second in the NL.

Ironton Fighting Tigers’ Luke Kelley slides safely into second base during the third inning of Wednesday’s game against the Huntington... read more