Hornets win to set up showdown 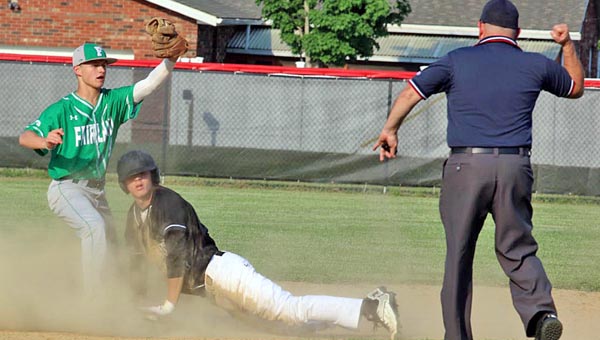 Tim Gearhart of Tim’s News & Novelties, Park Ave. in Ironton
Fairland Dragons’ Trace Adkins (left) shows his glove with the ball to the umpire who signals that Coal Grove Hornets’ baserunner Daniel Rutherford is out at second base. Coal Grove won 5-0.

COAL GROVE — The showdown is set.

The Coal Grove Hornets blanked the Fairland Dragons 5-0 on Friday in an Ohio Valley Conference game to set up a showdown for the league title.

Coal Grove is now 13-5 overall and 9-2 in the OVC, thus setting up a showdown on Tuesday at home against the Chesapeake Panthers.

Chesapeake is 10-1in the league and has clinched a share of the title. A Panthers’ win gives them the championship outright.

Having his share of fun on Friday was Hornets’ pitcher Daniel Rutherford who tossed a three-hitter, struck out nine and walked three in getting the win.

“Our outfield has played well all year and getting McKnight back at shortstop has helped and allowed us to move Malone to second.”

The Hornets got the only run they really needed in the second inning.

Sean Paulus doubled off the top of the fence and went to third on a passed ball. Chase McKnight walked and stole second and a throwing error on the play allowed Paulus to score.

“We’ve got some team speed and that helps,” said Mader.

Coal Grove got an insurance run in the fourth inning when Clark singled, moved up on a passed ball, took third on a throwing error and came home on Rutherford’s hit off the fence.

Rigsby was 2-for-3 as the Hornets had six hits of Dylan Murphy who struck out nine, walked three and hit a batter.

“Murphy threw a nice game for them,” said Mader.

Tyler George, Jonah Galloway and Garrett Scheibelhood all had singles for Fairland.

There’s a reason why players say “Hi mom” when the camera pans to them. Although there’s nothing like the father-son... read more