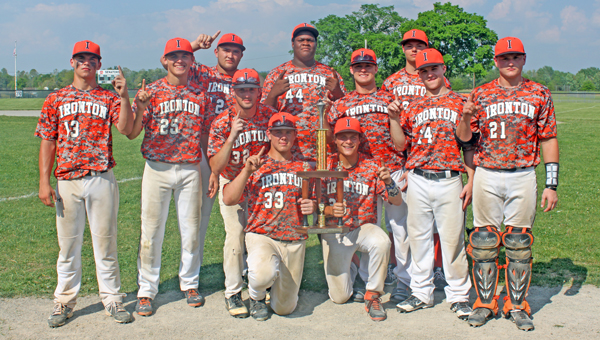 WEST PORTMOUTH — It was the Rock Nelson Wood Bat Tournament, so the Ironton Fighting Tigers decided to rock the ball.

Ironton had 16 and 17 hits in two games as they beat the Portsmouth West Senators 12-7 and Cross Lanes Christian 10-0 in six innings to win the annual classic.

“We hit the ball well all day. It was a back-and-forth game. We finally got our bats going and pulled ahead,” said Ironton coach Larry Goodwin.

Dane Wilson was 3-for-4 as Ironton had 16 hits against four West pitchers in the title game.

Garrett Carrico was 2-4 with four runs batted in, Kyle Kleinman 2-3 with an RBI, Luke Diamond and Luke Kelley 2-4 with an RBI, and Hunter Klaiber 2-4 with two RBI.

The trio of Cody Rawlins, Diamond and Carrico combined to allow just six hits and only two of the runs were earned in the title game win over West.

Diamond got the win in relief as he struck out four, walked two and gave up two hits. Rawlins started an worked 4.1 innings allowing four hits, one earned run while fanning six and walking two.

Carrico struck out one as he worked two-thirds of an inning to end the game.

“Cody Rawlins and Luke Diamond pitched very well and Garrett Carrico came in and shut things down at the end,” said Goodwin.

Ironton (12-10) got a run in the first when Wilson walked, Carrico was safe on a fielder’s choice to put runners at the corners and Kelley hit a sacrifice fly.

West answered in the bottom of the inning with a sacrifice fly of its own by Cody Finley after a double by Wesley Book and L.T. Maynard’s sacrifice.

The Fighting Tigers took a 2-1 lead in the third on singles by Diamond and Wilson and Carrico’s sacrifice fly.

Hunter Weber, Andy Bruce and Kleinman all singled, Tanner Price was hit by a pitch to force in a run and Diamond hit into a force play but an error allowed the second run to score.

West rallied to take a 5-4 lead in the bottom of the frame.

Finley was hit by a pitch, Luke Houseworth singled with two outs and an error scored Finley. David Matney was safe on an error and Aaron Dyer had a two-run double. Book singled to drive in the final run.

The Senators added another unearned run in the fifth when Finley reached on an error, stole third and Bays had a two-out RBI single.

But the Fighting Tigers came to life with four runs in the sixth to take the lead for good.

Bruce reached on an error and Kleinman had an RBI single. Diamond walked, Wilson singled and Carrico had a run-scoring base hit.

Kelley singled and Klaiber had a two-run single.

West cut the deficit to 8-7 in their half of the inning on a hit by Matney, a walk to Dyer, and an RBI fielder’s choice by Book.

Ironton opened up the lead with four runs in the seventh.

Bruce walked, Kleinman had a sacrifice, Price singled and went to second on an error as Bruce scored. Diamond doubled in a run, Wilson singled and Carrico followed with a two-run single.

“Dane pitched a great game and we executed our offense well. It was a good win for us,” said Goodwin.

Wilson also went 3-4 at the plate as Ironton had 17 hits.

Ironton snapped a scoreless tie with two runs in the top of the third.

Carrico singled, Kelley had a sacrifice and Klaiber got an RBI single. After a force out, Bruce singled to score Weber.

The Fighting Tigers rallied to score four runs in the fourth and it was 6-0.

Larry Morris doubled, moved up on a passed ball and scored on Price’s ground out.

Diamond walked and Wilson and Carrico singled to load the bases. An error scored Diamond and Kelley walked to force in a run and Carrico scored on a wild pitch.

Ironton ended the game early with a four-run sixth.

Wilson singled, Carrico was safe on an error and Kelley walked. A double play left runners at second and third and Weber singled in Wilson.

Bruce singled for an RBI and Rawlins doubled in a pair.

CINCINNATI (AP) — The Bengals signed quarterback Terrelle Pryor at the end of their rookie minicamp on Sunday, giving him... read more