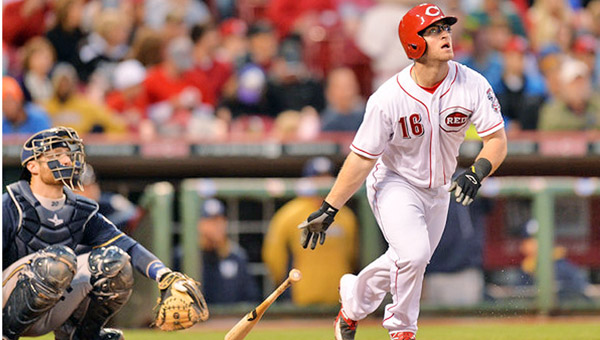 Cincinnati catcher Tucker Barnhart hit a sacrifice fly to drive in Brandon Phillips with the Reds’ only run in a 2-1 loss to Atlanta on Monday. (Photo Courtesy of The Cincinnati Reds)

CINCINNATI (AP) — Aroldis Chapman took a ninth-inning loss for the second game in a row — something that very rarely happens.

Pinch-hitter Phil Gosselin singled off Chapman to open the ninth, stole a base and scored on the closer’s 103 mph wild pitch, rallying the Atlanta Braves to a 2-1 victory over the Cincinnati Reds on Monday night.

The Braves snapped a three-game losing streak and sent Cincinnati’s best reliever to his second loss in two days. Chapman (1-2) also gave up a ninth-inning run during a 4-3 loss to the White Sox on Sunday — the first run he had allowed all season.

It’s only the third time in his career that Chapman has lost consecutive games. He did it twice during 2012.

“They’re putting the ball in play, in the air or through the infield,” manager Bryan Price said. “They’re not doing a lot of extra-base damage.”

Gosselin singled up the middle on a 100 mph pitch and took second base when Nick Markakis singled on a 98 mph fastball. Noticing that Chapman was slow in his delivery, Gosselin stole third.

“They take advantage of a slow delivery, which is something we have to work on,” Price said. “We can’t afford to just give up third base in that situation.”

With one out and Freddie Freeman at bat, Chapman threw a 103 mph fastball that sailed off the end of Tucker Barnhart’s mitt and went to the backstop, allowing Gosselin to score easily.

Left-hander Luis Avilan (1-0) retired all three batters in the eighth. Jim Johnson gave up a single in the ninth while getting his second save in three chances.

Both teams wasted bases-loaded chances to break it open.

Andrelton Simmons ended Mike Leake’s scoreless streak at 19 innings when he led off the fourth with a homer. The Braves went on to load the bases with one out, but Leake escaped the threat.

The Braves had another bases-loaded, one-out threat in the sixth but couldn’t score. Atlanta stranded six runners in scoring position during Leake’s six innings.

The Reds loaded the bases with none out in the second, when Shelby Miller gave up a pair of singles and hit Kristopher Negron in the shoulder. Barnhart’s sacrifice fly was all the Reds could manage.

Miller didn’t allow another runner until the seventh inning, when the Reds stranded two more.

The Reds tried to shore up the NL’s worst bullpen before the game, designating Kevin Gregg for assignment and calling up Pedro Villarreal. Gregg was 0-2 with a 10.13 ERA, giving up runs in seven of his 11 appearances.

Braves manager Fredi Gonzalez unsuccessfully challenged a call in the sixth. Plate umpire Laz Diaz ruled A.J. Pierzynski out at the plate on a fielder’s choice, with Barnhart taking the throw while straddling the plate. The Braves contended the catcher violated the collision rule, but the call was upheld.

Braves: Closer Jason Grilli played catch and ran on the field before the game, testing his achy back. He felt fine afterward, but Gonzalez decided to rest him one more day.

Reds: Shortstop Zack Cozart was a late scratch because of a sore left wrist, which was hit by a pitch on May 3. It was the fourth game he’s missed with the injury.

Braves: Mike Foltynewicz (2-0) tries for his second straight win over the Reds. He went five innings and gave up two earned runs for a 4-3 win at Turner Field on May 1.

Reds: Anthony DeSclafani (2-3) tries to get out of his five-inning rut. He has lasted only five innings in each of his last three starts, all losses, because of high pitch counts.

CINCINNATI (AP) — The Reds designated struggling reliever Kevin Gregg for assignment on Monday before the start of a series... read more