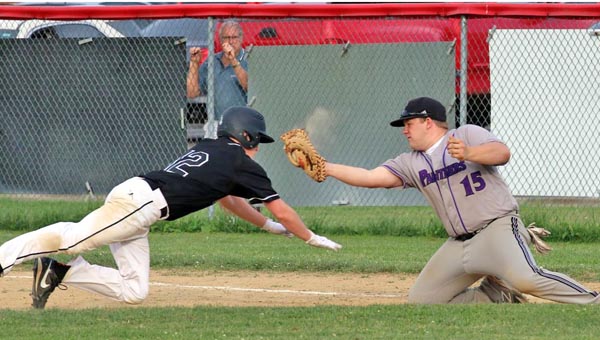 COAL GROVE — Unlike the Mayweather-Pacquiao fight, this battle lived up to its hype.

In a showdown for the league title, the Chesapeake Panthers used strong pitching and manufactured a couple of runs to edge the Coal Grove Hornets 2-1 on Tuesday and claim the Ohio Valley Conference baseball championship outright.

“It was one of the best baseball games I’ve been involved in the last two years. That’s the kind of game to play for the league championship,” said Panthers’ coach Justin Davis.

“We wanted to win it outright. If you lose, you share with the team that beat you twice.”

Davis praise Lester and the Panthers’ other senior pitcher Jacob Henson for their work towards the league title.

“When you have two horses you line can line up for league games all year, that helps you. The league was very competitive. Both (pitchers) have earned run averages under one. Usually, we just need a couple of runs,” said Davis.

“Lester was our horse tonight and he carried us. We were able to claw our way for a couple of runs later. Coal Grove is a good baseball team. They hit the ball really well.”

Coal Grove got its run in the first inning when Jacob Clark singled, went to second on a ground out and scored on Jesse Rigsby’s base hit.

The Panthers tied the game in the sixth.

Chesapeake got an unearned run in the ninth to get the win.

Dakota Blankenship was hit by a pitch, went to second on a ground out, and Blake Ashworth reached on a throwing error as Blankenship scored.

Coal Grove threatened in the bottom of the inning with two outs on a triple by Chase McKnight, but Lester struck out the next batted to end the game.

Coal Grove left nine runners on base including four

“We played really well, we just couldn’t get the hit when we needed it and they made the plays when they needed it,” said Hornets’ coach Dean Mader.

McComas was 2-3 for the Panthers. Clark was 2-4 with two doubles, Rigsby 2-3 with an RBI and McKnight 2-4 with a triple for the Hornets.