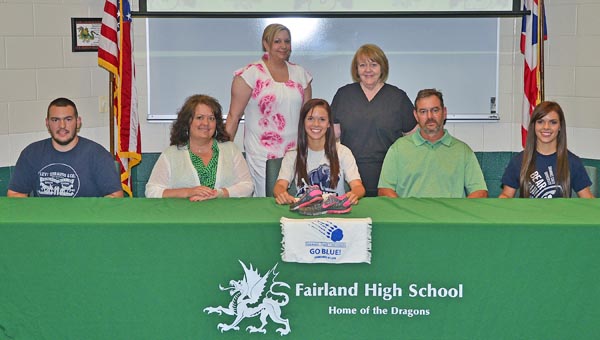 PROCTORVILLE — Some people feel the need to plan out everything. They like to stay on a schedule.

“Spur of the moment. Whatever comes up, I do it,” said Fulks.

The “spur of the moment” attitude is what brought her to the Fairland Lady Dragons cross country program and — ironically — set her up with a education plan for the future.

Fulks attended Symmes Valley but there was not cross country program.

“I just decided to come. My friend Abby got me into running and then I was running every day so I decided I might as well do something with it,” said Fulks.

Even though the idea of switching schools came quickly, it didn’t come easy. For the first time in her life, she would have to be separated from her twin sister Elly.

But the decision proved fruitful as Fulks signed on Thursday to run cross country and run track for Shawnee State University.

And even that choice had a “spur of the moment” feel.

“I talked to a few Kentucky schools, but I really wasn’t interested so I didn’t pursue them,” said Fulks.

“Some of my friends were going (to Shawnee State) so I said I might as well.”

At Symmes Valley, Fulks played basketball and was a cheerleader. Even though she was distance running on her own, the adjustment to a high school program was quite a transition.

“Cross country is very different stamina. I’m used to running down the court once and being done and not running for miles,” said Fulks.

“I thought I’d like running and then I came here. I was used to taking a drink of water every mile and here the first day I drank out of a puddle on the side of the road. Seriously. I didn’t know what to expect. It was a hot summer day.”

Fulks was a member of the Lady Dragons’ cross country team that won the Ohio Valley Conference meet, finished third in the Division II district and qualified for the regional meet as she posted times of 24:10.13 and 24:29.19, respectively.

Cross country may be relatively a new activity for Fulks, she said it has become part of her daily routine.

Although Fulks was only part of the program for two years, Fairland coach Chuck Wentz said she made an impact in her short tenure.

“Having her for two years was a little rough coming in. She came in on a pretty good team a couple of years ago and she worked her way into the top seven and then worked her way up this year and had a lot to do with us winning the conference and making it to the regionals in cross country,” said Wentz.

“I think she’ll qualify for the regionals in track this year. Hopefully, our 4-by-8 will make it out, maybe our 4×4. She’s a team player.”

Fulks plans to major in social work with a possible minor in criminal justice.

Emmy is the daughter or Doreen Fulks and Frank Fulks.

Reds use Bryd to fly by Giants

CINCINNATI (AP) — The Reds traded for Marlon Byrd to try to finally get something out of a left fielder.... read more