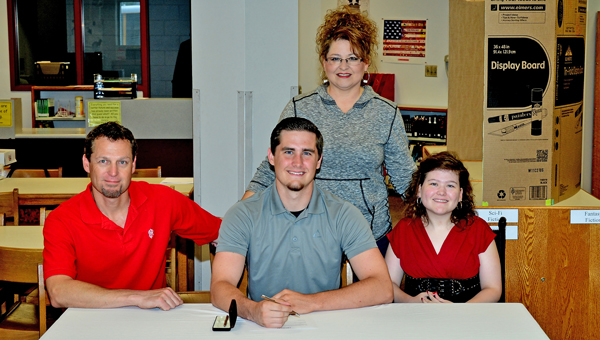 COAL GROVE — Jesse Rigsby is about to encounter a different brand of football. And Rigsby likes trying something new.

After playing in a run-oriented offense at Coal Grove, the 6-foot-1, 175-pound senior quarterback is head for a more wide-open game after signing to with the Denison University Big Red on Wednesday.

“They do a lot of reads, pistol most of the time. It’s a little different from what I’m used to, but I feel I’ll be able to adjust pretty quickly. It’ll be fun for me. I’ll have a lot more attempts, a lot more freedom,” said Rigsby.

Denison was 6-4 last season and lost its starting quarterback to graduation.

“Coming in, the spot is open to anybody. I’d like to get a shot at it, but I have to earn it. It’s open to whoever does the best. It’s not about seniority. If someone comes out and does better than me, he’s going to play,” said Rigsby.

There were several schools Rigsby considered including Marietta, Earlham and Ashland University, but he said he was pulled to Denison.

“I tried to stay mostly with D2 and D3 schools. I tried to stay local if I could. I came back to Denison because of the facilities and the coaching staff and I can go away to college but still be close enough to home if I need to be back in case of an emergency,” said Rigsby.

Rigsby set passing records for the Hornets despite their run-oriented offense. He helped lead the team to Ohio Valley Conference championships the past two years.

“He’s a great kid and a great leader. All the time he was here he made a positive impact. He’s an excellent quarterback and he always seemed to come up with a big play when we needed it,” said Lucas.

“I think he has the potential to play at that level. He has good arm strength, he has good speed, he’s smart. I think if they give him the opportunity he’ll excel at that level.”

Rigsby likes the opportunity that Denison presents him to play early provided he earns the job.

“They wanted me to come in and fight for a job,” said Rigsby. “It’ll be a lot different. Here, if you’re a talented athlete, it’ll carry through. There, everybody on the field will be athletic. You just have to be focused all the time and be committed to what you’re doing.

“I’ve talked to them four or five times. I’ve been on campus to some of their camps. I’ve sat in on some team meetings. They said I shouldn’t have any problem learning the offense. They said I should be able to learn it in about a week.”

Jesse — who plans to major in Mathematics or Physics — is the son of Jere and Rachael Rigsby of Coal Grove.

Jim Walker jim.walker@irontontribune.com   This was not the ending to the story that the Ironton Fighting Tigers wanted to write.... read more