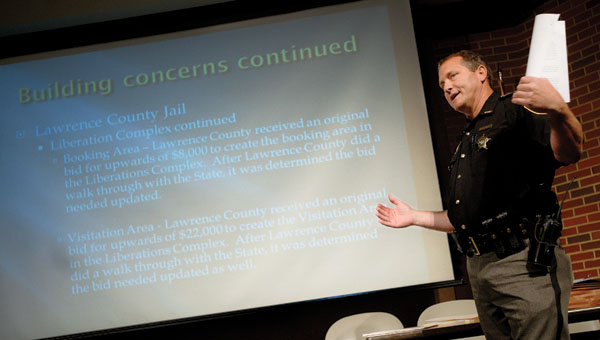 Lawrence County Sheriff Jeff Lawless addresses a crowd, including those from Columbus and Scioto County during a town meeting.

As far as the state is concerned, the lease is signed so moving the Lawrence jail out of the county is a project that is going forward.

If not, there could be consequences for the county, including possibly taking attorney-driven action on any default.

That was state corrections director Gary Mohr’s position following a 90-minute public forum requested by the state and attended by about 30 at Ohio University Southern-Ironton Bowman Auditorium.

“The lease is agreed by Lawrence County,” Mohr said after the forum. “We take that seriously.”

How to fund the move and its subsequent annual operation, however, has yet to be publicly decided upon with the auditor’s office saying the money isn’t there in the current budget.

Yet voters may get the chance to decide if they want to fund the move, according to commission president Les Boggs, who told the forum it was his understanding there would be on the ballot “a levy in the fall for jail operations.”

No levy can go on the ballot without the approval of two of the three county commissioners. A few years ago both Boggs and commissioner Freddie Hayes Jr. refused to support a proposed levy to fund emergency services; Hayes has consistently said he would not support any kind of additional tax.

Should the county turn down the offer, Mohr said the state would take a more serious look at the jail’s deficiencies.

At issue is the state’s offer of a 100-bed unit at the now closed Ohio River Valley Juvenile Correctional Facility in Scioto County, the majority of which will house an expansion of the neighboring STAR Community Justice Center that focuses on rehabilitating those who have committed crimes due to alcohol or drugs. The offer is to give the county a facility to use as its jail since the current site has repeatedly come under fire for failure to meet state standards, especially overcrowding. Typically the jail has a census that is three times the state standards.

“This is not state-mandated,” Mohr said at the forum. “We look at it as an opportunity. If this wouldn’t work out, we can’t let the jail stay the way it is. We would do a strong enforcement of the population number. We would have to enforce it because of the liability issue.”

Mohr admitted later shutting down the jail could only, however, be done by a judge’s orders, not by the state.

Should the county default on the 15-year lease, “we would get a bunch of attorneys together and figure out the lease stuff,” Mohr said after the meeting.

The heart of the forum was a joint presentation by Lawrence County Sheriff Jeff Lawless and STAR director Eddie Philabaun on how they would both make the move to the ORV.

Besides startup costs of approximately $50,000, the annual budget to operate the unit as the jail would run about an additional $1.3 million, including more staffing.

Already Philabaun has hired 26 more employees with the intention of adding eight more. Training for the first 26 has already begun.

Lawless anticipates needing 32 more corrections officers yet has not hired any because he hasn’t any funding for that or training, he said.

“Some have said my numbers are inflated,” Lawless said. “It would not cost that much, I’d like someone to show me otherwise. This comes at a big expense. I am tired of being sued. I need to be properly funded.”

STAR recently received a $3.9 million increase from the state for its budget for staff that does treatment.

Cost savings had been suggested by allowing STAR provide meals for the inmates at a cost of $2.48 per meal and laundry for $1,166.67 a month. However, shifting the jobs of the current jail cooks, who also do the laundry, would violate their union contract, chief deputy Chris Kline said.

“A grievance will be filed against you,” Kline said. “You can be assured this will happen. The county has never once won any one of those cases. Collective bargaining always prevails.”

The unions will also not allow a change to 12-hour shifts without significant concessions, Lawless said. That was also offered as a cost saving.

The commissioners must determine if and in what way they will allocate revenue for the move to the ORV.

“I have been begging the county to increase my budget at the current jail for a long time so I can get it closer in line with today’s standards,” Lawless said. “We are in dire need to have this ORV project work. Should the ORV project fall apart, the county is still going to have to put in a lot of money in the current jail to bring it up to standards. I am hopeful a serious funding solution can be found as the result of today’s meeting.”

Ironton man gets 13 years in prison

An Ironton man found guilty by a jury of selling oxycodone claims he was denied a speedy trial at his... read more