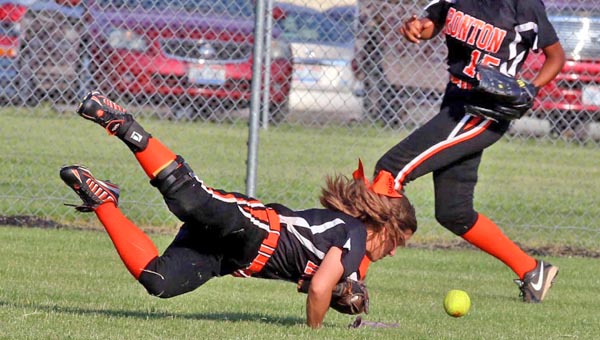 Trailing by seven runs in the bottom of the sixth, Ironton rallied but fell short in an 11-9 loss to the Minford Lady Falcons on Friday in the Division III sectional finals.

Ariel Kingery got the win as she allowed nine hits, struck out one, walked three, a and hit a batter. Katie Grose was 2-4 with five runs batted in for Minford.

Kylee Metzger got the loss as she struck out four, walked seven and four of the 11 runs were earned.

Ironton got a run back in the bottom of the inning thanks to a wild pitch and tied the game in the third.

Kenzie Cremeens singled, moved up on two errors and scored on an RBI hit by Aley Carmon.

Kylie Barcus and Cremeens reached on errors as Ironton got a run in the fourth, and Breanna Klaiber singled and scored on a hit by Zjaytia Black-Mize in the fifth to trail 5-4.

Minford put together a six-run sixth thanks to four Ironton errors.

Rian Montavon reached on a dropped pop-up, Pica singled and an error put runners at second and third. Kingery doubled home a run and Grose had a two-run single.

Zoe Doll reached on another error and Tristan Smith got a two-run single. Montavon reached on an error again as a run scored for an 11-4 lead.

But Ironton kept coming back.

The Lady Tigers got a run in the sixth when Taylor Monk singled home pinch-runner Rylie Vaughn.

Ironton then put together a four-run rally in the seventh.

Ariel Whitt singled, Barcus reached on an error and Katie Burcham walked to load the bases. Kylee Metzger then line a singled for an RBI.

Cremeens drilled a single to center to score Barcus and two Minford errors plated Erica Collingsworth and Vaughn to make it 11-9.

But Kingery managed to get the next batter out to end the game and survive the comeback bid.