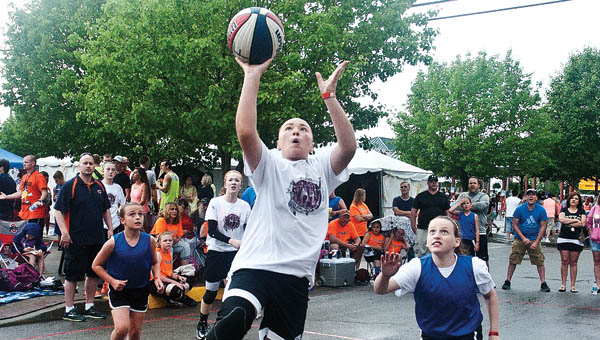 Local and visiting players take to the courts for the annual Gus Macker 3-on-3 Basketball Tournament.

On Saturday tents and sports umbrellas prevailed all along South Second Street in Ironton as no one was apparently going to allow off and on showers to dampen their Gus Macker basketball tournament.

As far away as Elliott County, Kentucky, came Chris Whitt, a middle school basketball coach, who brought a team for the first time to the Macker.

“We have talked about this for two or three years,” Whitt said. “And we let it slip by us. I thought this would a fun something to do.”

Whitt has coached the boys who teamed up to call themselves the Eastern Kentucky Ballers since they were 6 years old.

As the guys waited on the sidelines for their turn at the court Saturday morning, Whitt said he saw the team’s strengths in their quickness and shooting.

This year’s Macker kicked off early Saturday morning with games played throughout the day taking in all ages.

Chris Hughes, 11, from Jackson, came for the first time last year. He has been playing basketball since he was 5. This time his Macker team was called the Iron Men.

“I think it gives me a chance to learn,” he said.

First time on the court the Iron Men lost, but were hopeful the next time would bring victory.

Hughes’ mother, Melissa, agreed with her son about the value coming from playing in the Macker.

“It is a different experience,” she said. “It will teach him about being aggressive on the basketball court.”

The Macker games continue through today.

Ironton aLive will host a juried artisan festival this fall, and organizers are calling for vendors to register early. The... read more