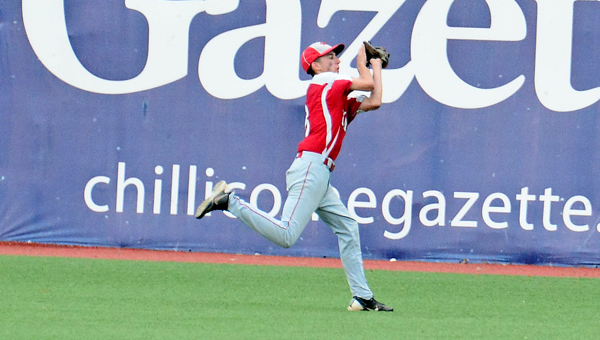 Symmes Valley gave an outstanding effort, but the Paint Valley Bearcats managed a run in the bottom of the eighth inning on a bases loaded walk to edge the Vikings 5-4 on Monday in the Division IV district finals.

“My kids played their hearts out. I’m proud of them. That’s the best team we’ve played all season,” said Vikings’ coach Chad Renfroe.

“Our kids left everything on the field. They weren’t giving much of a chance to win, but they came out swinging and they came out playing.”

In the bottom of the eighth, Skyler Knisley and Clay Archer singled and Caleb Johnson was safe when the Vikings’ failed to get the force play at third base on a questionable call and the bases were loaded.

Jonathan Henson then drew a walk with no outs to force home Knisley to end the game.

“They executed at the end. You have to execute in games like this. It came down to whoever made the most plays,” said Renfroe.

Trent Thompson and Dillon McFann combined to do the Vikings’ pitching. Thompson went five innings allowing four runs — three earned — and seven hits along with two strikeouts and two walks. McFann gave up five hits, one walk and one earned run in taking the loss.

Anthony McFadden went 4.2 innings, then gave way to Mason McCloy for 2.1 innings. McFadden returned to pitch the eighth and notched the win. He had a combined 5.2 innings pitch, gave up nine hits, three earned runs, struck out five and walked two.

The Vikings took a 2-0 lead in the second inning.

Chayden Renfroe then drilled a shot that bounced over the head of the centerfielder and rolled to the warning track for a double that enabled Carpenter to score.

The lead went to 3-0 in the third inning as Payton Hayes walked, Klaiber singled and a Bearcat error scored Hayes.

Paint Valley got a run backing the fourth on a sacrifice fly by Archer to score Josh Krech.

The Vikings got the run back in the top of the fifth to lead 4-1 when McFann singled, moved up on a fielder’s choice and scored on Klaiber’s base hits.

But the Bearcats got two runs back in the bottom of the inning on a walk to Drake Stanforth and RBI triples by Teagan McFadden and McCloy.

Paint Valley tied the game in the sixth.

Knisley and Archer singled but Johnson lined into a double play. Henson then singled home Knisley and it was 4-4.

The Vikings got a single and a walk to start the eighth but then McFadden — returning to the mound — got the next three batters to end the threat.

“They did a great job for us. They won a bunch of ballgames for me,” said Renfroe whose team finished 17-4.

Paint Valley (20-5) will play in the regional tournament at 5 p.m. on Thursday, May 28, in Lancaster against the Newark winner.