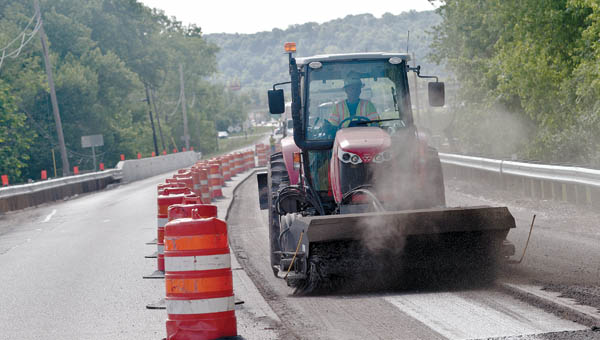 PROCTORVILLE — The wait is over — literally. Or at least will be soon.

On Friday afternoon the Indian Guyan bridge should be open to two-way traffic for the first time in a year.

Since June, the bridge replacement project that reduced the roadway to one lane with a signal light often snarled traffic going in and out of the Rome Township area, especially during the 2014 county fair.

“They are finishing things up this week,” said Kathleen Fuller, public information officer for District 9 of the Ohio Department of Transportation. “They took the barrier down (Monday). Now they have to groove and grind the old pavement.”

The last step is putting down new asphalt that should be finished today.

“They should stripe it on Friday afternoon and then take the signals down,” Fuller said.

The roadway is expected to be open by 4 p.m. Friday.

Complete General Construction of Columbus was the contractor.

With the upcoming retirement of Ironton Fire Chief Thomas Runyon at the end of May, Senior Capt. Mike Hasenauer will... read more