Smokestack to be ready by Monday 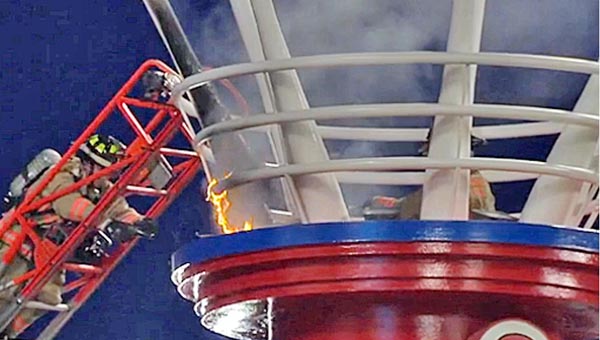 The fireworks smokestack at the Cincinnati Reds’ Great American Ballpark caught fire last Friday during a game against San Francisco. The fire did not threaten the fans or stop the game. Officials said the smokestack will be ready to use when the Reds return home on Monday. (Photo Courtesy of The Cincinnati Reds)

CINCINNATI (AP) — Officials with the Cincinnati Reds say the fireworks smokestack at Great American Ballpark that caught fire last week has been inspected by engineers and is expected to be up and running when the team returns for its next home game Monday.

Vice president of ballpark operations Tim O’Connell says the smokestack fire was caused by a malfunction in an individual firework, and there was no damage to the structure itself.

Two riverboat smokestacks typically shoot celebratory flames and fireworks during Reds games. One inadvertently shot flames, then fireworks during the sixth inning of Friday’s game between the San Francisco Giants and the Reds.

O’Connell tells The Cincinnati Enquirer there will be another full inspection before operating the smokestacks again, but there appears to be no danger going forward.