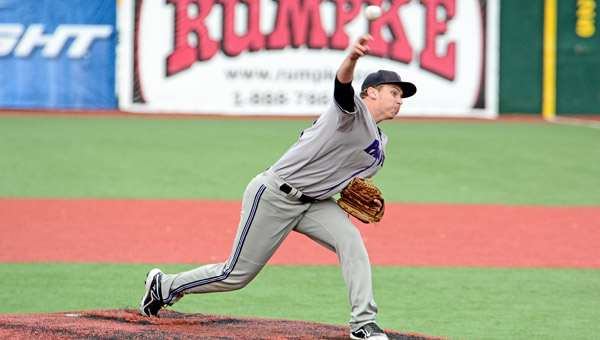 Chesapeake’s Blake Lester threw a six-hitter but the Panthers lost 3-0 to the Wheelersburg Pirates in the Division III district finals on Thursday. (Kent Sanborn of Southern Ohio Sports Photos.com)

CHILLICOTHE — Wheelersburg has beaten Chesapeake in the postseason tournament in each of the last two seasons, but the Panthers have made it tough on the Pirates.

Last season, the Pirates beat the Panthers 2-0 in the sectional finals. On Thursday, Wheelersburg managed to get past Chesapeake 3-0 in the Division III district finals at Veteran’s Stadium.

Martin had a perfect game with two outs in the seventh inning when he gave up back-to-back singles to Lester and Dakota Blankenship. He struck out 16 and did not walk a batter.

Lester gave up only six hits — two were bunt singles — while striking out two and walking two.

The Pirates got a run in the first inning when Jordan Howard walked, Tristan Browning had a bunt single, Martin hit into a force play and Kyle Jenkins hit into a fielder’s choice as the run scored.

Davis was 2-for-3 as the Pirates won their eighth straight district title.