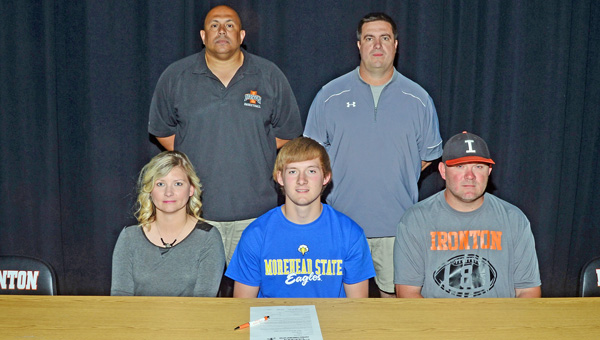 He’s an athlete. He’s All-Ohio in two sports. He plays on both sides of the ball in football.

There are a lot of adjectives to describe Tristan Cox, but there is one word that best describes him overall: Competitor.

When the Ironton Fighting Tigers’ senior football and basketball standout decided he wanted to play college football, the school and the position didn’t really matter.

“Anywhere I go I want to win. I never want to lose. That’s how competitive I am. I’d do anything to win. I’d sell my soul,” said Cox with a chuckle.

“I was just playing it by ear. It’s not like I’m going to be the hero and turn (the program) around. I definitely wanted to take a chance to make a program better.”

Cox will take his competitive nature along with his talents to the next level after signing to play for the Morehead State Golden Eagles on Friday.

He played quarterback as well and ran for more than 400 yards while throwing for another 600 his senior season. During his junior year when injuries ravaged the team, Cox was the offense with 598 yards rushing and 640 passing.

But it was his play at defensive back that caught the eye of Eagles’ coaches.

“There were a couple of small, private schools I talked to. No one really show much interest until coach (Zack) Moore got hired on at Morehead. He talked to (Ironton) coach (Mark) Vass and then he talked to me and that’s when it got going,” said Cox.

“I liked Morehead the whole time. I was going there. I had already signed up and had classes there.”

Cox is along the lines of some former Ironton quarterbacks who played safety with a linebacker mentality such as Ryan Guthrie, Mark Snyder and current head coach Mark Vass.

Vass — who not only played college football but also coached at the college level for several years before returning to Ironton — said Cox has the tools to play at the next level.

“Tristan was a great player and leader for us. He was a big part of our success the last three or four years,” said Ironton coach Mark Vass. “One of the big things about Tristan is that he’s a great competitor. He’s a team player and he does whatever you ask of him. I definitely think he can handle it.

“He has the talent and the work ethic, but it’s a different game at the college level. It’s about the commitment and time management with the grades and sports. It turns into more of a business atmosphere. As long as he’s committed to it, he’ll have a great career and more importantly come out of it with a college degree.”

As far as Cox is concerned, playing safety is just fine with him.

Cox said he expects to play on special teams initially, but he is hoping to work his way into more playing time for the Eagles who are thin at the safety position.

“Coming in, I’m pretty sure I’ll be on special teams. Freshmen coming in have to start somewhere. Hopefully by a couple of games into the season, I hope to be playing often. I’d like to start,” said Cox.

Morehead State has had a good Division I-AA program, but the Eagles were 4-8 last season. Cox thinks the program has the ability to rebound next season.

“I think they’ve got guys who’ll work and coaches who will work. The coaches put in time. They seem to put in a lot of hard work and a lot of hours. I think we can turn it around.,” said Cox.

“We just have to have some freshmen who will play all the way through and not drop out (of the program).”

Despite all his accolades, Cox said a lot of his success reflects on the people in the school system as well as his parents.

“The coaches, the teachers and (secretary) Mrs. (Theresa) Bowen, they helped out a lot. They pushed me and helped me make the right decisions,” said Cox.

“I think being here and playing shows hard work pays off. If you get a bunch of guys and they all put the work in, there’s going to be a good outcome. It showed me how to go about business.”

Tristan is the son of Kelli and Ralph Cox of Ironton.