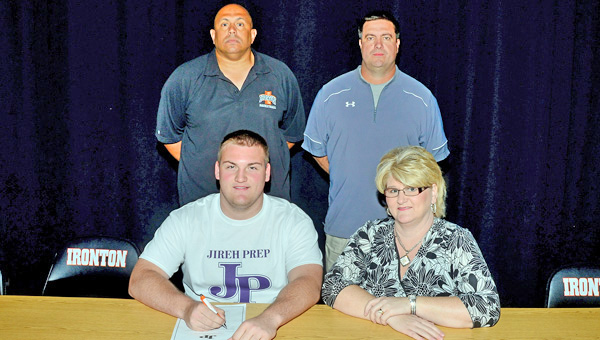 Midway through the third quarter of the opening round playoff game against Martins Ferry, Isaac Sherman suffered an injury.

But this wasn’t just an injury. It was a broken ankle that left a cloud of uncertainty lingering over his future.

He said a lot of things ran through his head that night, but one thought kept coming back time and again.

“The fact that I’d never play football again was the biggest thing. I thought I definitely wouldn’t play any more,” said Sherman.

Just one week prior to the injury, Sherman had made a visit to Missouri. But after the injury, the 6-foot-4, 300-pound two-way tackle said the calls stopped.

McConnell is from Huntington, W.Va., and was familiar with Ironton and Sherman’s situation.

“He contacted me really. I had no idea about it. I didn’t know about (their program). He knew about me. He heard about my injury. He’s from this area. He knew all about Ironton and everything we uphold here,” said Sherman.

It didn’t take long for McConnell to convince Sherman to take a different route to college football and on Friday he signed to play for the Warriors.

Sherman will play one semester. He reports Aug. 1 and returns Dec. 12.

“I go down there and play ball and work on my academics still,” said Sherman.

“They can place me wherever, Division I, Division II. He has big things for me. He thinks I can play Division I. All I have to do is get my leg going again and make me a Division I athlete.”

McConnell plans to play Sherman at the all-important left tackle position, but he expects Sherman to play guard at the college level.

Jireh Prepatory Academy is in Mathews, N.C., a suburb of Charlotte. The Warriors were 5-5 last season and play a schedule filled with college junior varsity teams including the Naval Academy junior varsity. Also on the schedule is the prestigious Fork Union Military Academy.

Ironton head coach Mark Vass not only played college football but also coached at the college level for several years before returning home. He said Sherman has the tools to play at the next level.

“He can definitely handle it. He has the talent and work ethic. As long as he’s committed to it, he’ll have a great career and most importantly come out of it with a college degree,” said Vass.

“I’m really proud of him. This is an exciting day. He was not only a great player for us, but a great leader and competitor.”

Although he is excited about the chance to continue his career, he said he has nothing but positive experiences from his Ironton career.

“The community,” Sherman said is what stands out for him. “Everybody is on my back and they really push you athletically and academically.”

Isaac is the son of Bethanie and Harold Sherman of Ironton.