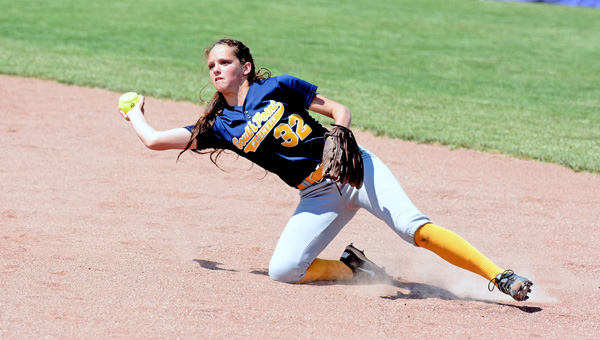 There was plenty of offense to enjoy Saturday as the South Point Lady Pointers outscored the Westfall Lady Mustangs 14-10 to win the Division III district title.

“We got up 7-2 and I felt pretty good, but they scored three and we scored two and then we scored five more. I was just hoping they didn’t come back again,” said Lady Pointers’ coach Tanner Heaberlin.

South Point (14-9) will now play Portsmouth West at 5 p.m. on Thursday, May 28, at Lancaster High School in the regional semifinals. West beat Alexander 4-1.

In the other bracket, Wheelersburg plays Sugarcreek Garaway at 5 p.m. on Wednesday, May 27, at Lancaster. The two winners meet at noon on Saturday.

“The girls are playing real confident right now,” said Heaberlin. “We knew (Westfall) was going to hit the ball, but other than the one inning we played pretty good defense. Halie Powell had a tremendous game at the plate. She really stepped up.”

Powell went 3-for-4 with two doubles as South Point had 12 hits. Lexi Smith was 2-5, Sylvia Griffith 2-4 and Jamishua Anderson had a double.

South Point tied the game in the second when Halie Powell singled, Emilee Powell reached on an error, and they came around to score on a wild pitch and two passed balls.

The Lady Pointers got five runs in the third.

Abby Hannah and Anderson doubled for a run. Abbey Winkler walked, Haley Rawlins double for a run, Griffith singled for a run but Rawlins was thrown out at home.

Halie Powell walked, Emilee Powell was hit by a pitch, Leah Lawson singled and Hannah had a two-run single.

Westfall got within 7-4 in the bottom of the inning on a double by Regan Stonerock, a walk to Becca Brown, a single by Kelsie Robinson and a two-run single by Lauren Smith.

South Point got the runs back in the fourth as Smith singled, Griffith was hit bya pitch, Halie Powell had an RBI double and Emilee Powell singled for a run.

An error, a single by Denise Arledge and a double by Kelly Fuchs scored a run and an outfield error on the play allowed two more runs.

But South Point rallied for three runs in the fifth to lead 14-7.

Anderson and Winkler walked, Smith singled and Rawlins hit a sacrifice fly. Griffith singled in a run. Halie Powell had a two-run double and Emilee Powell reached on an error for a run.

Westfall got three runs in the seventh on three singles, a wild pitch and an error.

The district title was the first for South Point since 2000.