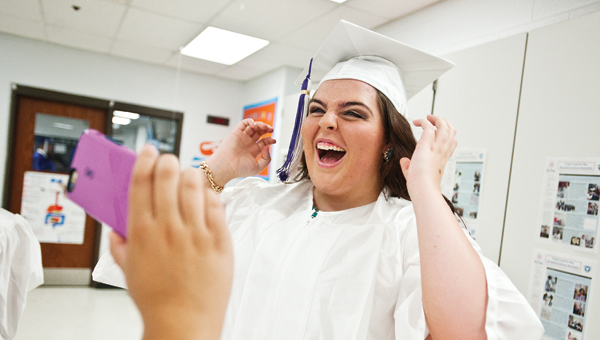 Tasha Waller breaks out into hysterical laughter while using her camera as a mirror to put on finishing touches to her graduation ensemble before the start of commencement at Chesapeake High School on Sunday.

CHESAPEAKE — A few last selfies with friends, then it was time to get ready for the last time she would be together with her classmates all in one place.

It was a realization many of her other classmates had as well on Sunday before commencement began.

“I’m sad,” Sydnee Hall said. “because I don’t want to leave all my friends. High school was really fun and I’m going to miss it.”

For others, anxiety was growing as they waited for the call to line up for the processional.

“I’m surprised that it’s (high school) gone by this fast,” said Dorien Lambert, who said he would miss some of the people he had gone to school with.

He would also miss eating lunch with his friend, Logan McCloud, as they had done every day for the past four years. Lambert will attend Shawnee State University to study plastics engineering.

McCloud, also graduating that day, said he was feeling anxious about starting college at Marshall University to study pre-pharmacy, but that he was ready to move on to the next step.

Both said it was a bittersweet feeling to leave high school behind.

As uncertain as some of the seniors felt, Chesapeake High School Principal Chris Smith said as long as they continue to work hard, they will be fine.

“They are a great group of kids,” Smith said, noting their achievements have not solely been academic. “They have given to their community. They are just good kids. As long as they are willing to work hard, they will be fine.”