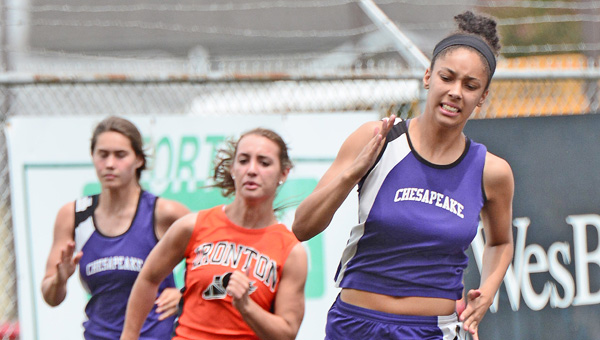 NELSONVILLE — Atiya Spaulding only qualified in four events because that’s all the rules allow.

The Chesapeake Lady Panthers’ junior track standout won three events and finished third in another as she led area qualifiers at the Division II district track meet on Saturday at Nelsonville-York High School.

The top four finishers in each event qualify for the regional meet Thursday at Saturday at New Concord John Glenn High School.

Chesapeake’s Jaylynn Price was third in the 100 meters with a 13.3 time.

Ironton’s Lexi Wise was eighth in the 300-meter hurdles with a 53.3 clocking. The Lady Fighting Tigers’ 4100 relay team of Peyton Arden, Autumn Shope, Starr and Wise ran a 55.5 to finish seventh.

Sheridan won the meet with 128 points. Chesapeake was fifth with 45 points.

South Point’s Brady Sloan took second in the high jump with a leap of 6-1.

Wireman advanced in two events as he finished third in the 300 hurdles with a 42.23 time.

The South Point 4×100-meter relay team earned a trip to the regional meet by winning that event as Stephen Wagoner, Trent Paterson, Mason White and Keion Dre’ Hill had a 44.861 time, just edging Sheridan at 44.864 seconds.

Fairland’s Zach McKinney was third in the shot put with a heave of 46-3.25 and South Point’s Ryan Webb seventh at 42-5.

McKinney finished second in the discus on Wednesday.

In the 4×400 relay, Chesapeake’s team of David Dotson, Kodey Hager, Sanders and Fletcher was seventh at 3:42.25l and South Point’s quartet of Micah Harris, Wagoner, Stephens and Tatlonghari was eighth at 3:44.20.

CLEVELAND (AP) — One of the few things that the Cincinnati Reds had been doing well was playing defense. Not... read more