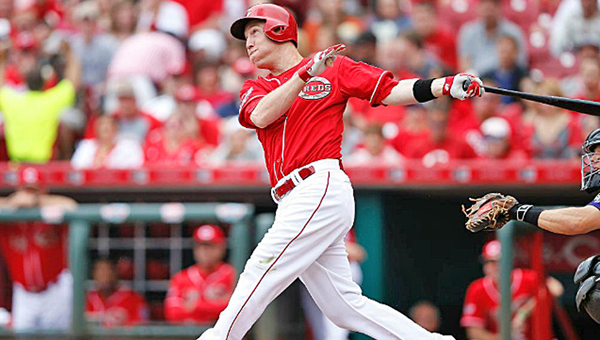 Cincinnati third baseman Todd Frazier connects on a two-run homer in the first inning of Monday’s game against the Colorado Rockies. Frazier’s 13th home run of the season wasn’t enough as the Reds lost 5-4 for their ninth straight defeat. (Photo Courtesy of The Cincinnati Reds)

CINCINNATI (AP) — The Reds haven’t lost so many games in a row since Jack McKeon was in charge. And that was six managers ago.

Cincinnati dropped its ninth in a row on Monday in its longest losing streak in 17 years. Nolan Arenado had three hits, homered and drove in the tiebreaking run with a sacrifice fly off Aroldis Chapman in the ninth inning, leading the Colorado Rockies to a 5-4 win.

The question is how long the Reds will stumble around before making a major change. Most of the changes so far have involved juggling the batting order and reorganizing the rotation.

The losing streak is Cincinnati’s longest since it dropped 11 straight in June 1998 under McKeon.

“Nine in a row is not fun,” said Jason Marquis, who gave up four runs and 10 hits in 5 2/3 innings. “When you’re losing, obviously you tend to find the negatives more than the positives. The mistakes jump out at you.”

Chapman (2-3), Cincinnati’s most reliable reliever, issued a leadoff walk to Charlie Blackmon in the ninth. Blackmon then advanced to third on D.J. LeMahieu’s single and scored easily when Arenado hit a routine fly to center fielder Billy Hamilton, whose throw was off-target.

Rafael Betancourt (2-1) retired each of his four batters. John Axford gave up a walk in the ninth while getting his seventh save in seven chances.

The riverboat smokestacks that celebrate home runs and strikeouts were back in action after one of them caught fire during Cincinnati’s last homestand. They shot off fireworks after Todd Frazier’s two-run homer in the first inning off Eddie Butler, his 13th overall.

Price tried to get more out of his struggling offense by batting Marquis eighth and the slumping Hamilton ninth, the first time since 1933 that a Reds pitcher batted anywhere other than ninth.

“Listen, this is no science experiment,” Price said. “This is just trying to find a way to create our best offense. So it will be something we’ll take a look at and see if it helps fire up the offense. These are the things you see when a team struggles.”

Marlon Byrd doubled and scored on Hamilton’s single in the fourth, cutting the Rockies’ lead to 4-3. Byrd’s leadoff homer in the sixth tied it. Butler gave up four runs and nine hits in six innings.

Frazier extended his hitting streak to a season-high seven games. Five of his 13 homers have come in the first inning, all of them at Great American Ball Park. … Byrd has eight homers and 17 RBIs in May, both team highs. … Chapman allowed runs in back-to-back appearances for the second time this season.

The last time a Reds pitcher batted anywhere other than ninth was Sept. 7, 1933, when Red Lucas batted seventh against Brooklyn. The Reds lost that game 2-0.

Rockies: RF Carlos Gomez was supposed to be in right field but was scratched because of a stomach illness.

Reds: C Devin Mesoraco went on the 15-day DL with a sore left hip. LHP Manny Parra was activated off the DL, recovered from a strained neck. RH Johnny Cueto was examined for a stiff right elbow.

Rockies: LH Jorge De La Rosa makes his seventh start since recovering from a strained groin. He is 1-2 with a 6.51 ERA.

Reds: RH Michael Lorenzen makes his fourth start, after making his last two appearances in relief. Lorenzen is 1-1 with a 2.81 ERA as a starter.