Last of fair projects picked up by 4-Hers 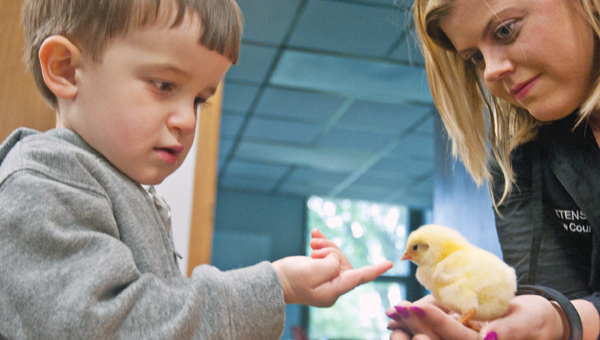 Only a day old and already 290 chicks found homes, albeit temporary, as they were doled out to 29 4-Hers last week at the extension office at the courthouse.

“Each 4-Her gets 10,” Rachael Fraley, 4-H extension educator, said. “They show their best two. You want to raise them to match in weight and be most similar in everything.”

By the time the fair rolls around in July, these Cornish Rock Cockerels will be 7-weeks-old, the average age for chickens ready for market. Each set of 10 costs $20.

“That’s how it is with market steers because they are so large,” Fraley said.

So far 180 have signed up to show market rabbits, but the actual number of rabbits that will be brought to fair won’t be known until after the weigh-in on June 6.

During the 2014 fair some on the fair committee were considering changing how the junior showmen of show would compete. Previously, the younger 4-Hers would be quizzed about each animal brought to the fair, but would not actually handle them all as do the senior showmen. The committee had thought, however, both age groups would show all animals.

But now, the junior competition will be conducted as it has in the past.

“The problem is they are so young and just getting started with their own projects,” Fraley said. “They don’t need to be put in the ring with animals they can’t handle. It is challenging.”

Before the fair starts the 4-H office is teaming up with the Lawrence Soil and Water Conservation District to offer a conservation day open to 7 to 11 years old on June 12.

“We hope to learn about major projects, do some fishing, hiking and safety,” Fraley said.

Those interested must sign up at the 4-H office in the courthouse or at the conservation district office by June 11. The cost is $10.

Starting on June 2 for four weeks the 4-H office will offer a fit family challenge for families with children 5 years old and up. Nutrition information and exercises will be presented. The sessions will be each Tuesday from 2-4:30 p.m. at the Ninth Street River Hills Center. There is no cost but registration is required by June 1.

The inmate at the center of a federal case against three former Lawrence County jailers is suing the county over... read more