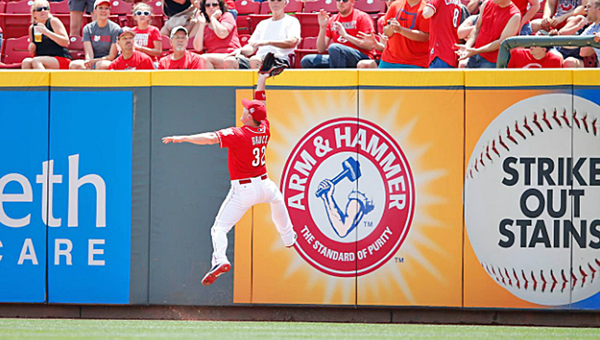 Cincinnati rightfielder Jay Bruce makes a leaping catch against the wall during the second inning of Wednesday’s game against the Colorado Rockies. The Reds lost to the Rockies 6-4. (Photo Courtesy of The Cincinnati Reds)

CINCINNATI (AP) — A few hours after they celebrated a rare win, the Cincinnati Reds held a closed-door meeting to mull yet another loss.

Nolan Arenado hit a three-run homer on Wednesday, and Kyle Kendrick pitched into the eighth inning for his first win since opening day, leading the Colorado Rockies to a 6-4 victory over the sinking Reds.

The Reds have lost 10 of 11, a streak that started when one of the home run smokestacks at Great American Ball Park caught fire during a loss to the Giants on May 15. Manager Bryan Price held a closed-door meeting after the latest defeat.

“Nobody likes talking about the last 11 games,” Price said. “Nobody in there is bringing in any dancing girls.”

Catcher Brayan Pena said Price was the only one who spoke during the brief meeting.

“He just said we need to keep grinding and trust our ability,” Pena said. “He knows we have the talent. It was very good. It was something that we needed to hear.”

The Reds ended a nine-game losing streak — their longest in 17 years — with a 2-1 win on Tuesday night. They didn’t have much of a chance as Mike Leake (2-4) struggled through another rough start, giving up nine hits and six runs in only five innings. Charlie Blackmon hit a two-run homer in the second inning.

In his past three starts, Leake has allowed 20 runs, 27 hits and six homers in only 14 innings, contributing to the team’s two-week slump.

“We’re beat,” Leake said. “Mentally, it’s eating us up, but a lot can happen in four months. I think we’re putting too much pressure on ourselves.”

The Rockies won for the fourth time in five games. Arenado had a lot to do with it, going 9 for 16 with three homers, one triple and 10 RBIs in the past four games.

Arenado hit his 10th homer in the first inning and added a single, giving Kendrick (2-6) the help he needed to get a long-awaited win.

Kendrick signed with the Rockies as a free agent, pitched seven shutout innings to beat Milwaukee on opening day, and hadn’t won since, going 0-6 with a 7.58 ERA in his past eight starts. The right-hander gave up five hits, including solo homers by Todd Frazier and Tucker Barnhart, in 7 1-3 innings.

Boone Logan walked Frazier with the bases loaded in the eighth and gave up Jay Bruce’s RBI single, cutting it to 6-4. John Axford faced three batters in the ninth while getting his eighth save in as many chances.

Six of Frazier’s 14 homers have come in the first inning, all of them at Great American Ball Park. Over the past two seasons, Frazier has hit 29 of his 43 homers at GABP, where he would love to be able to participate in the All-Star home run derby in July.

Colorado’s D.J. LeMahieu had a pair of singles, extending his hitting streak to 10 games (15 for 37).

Rockies: Left-hander Jorge De La Rosa, who was skipped on Tuesday because of a cut on his pitching hand, will start on Saturday in Philadelphia. Jordan Lyles, who has a sprained toe on his left foot, will start on Sunday.

Reds: Second baseman Brandon Phillips was out of the lineup for a second consecutive day because of a sore left foot. He pinch hit in the ninth and struck out.

Reds: After a day off on Thursday, Cincinnati continues its homestand with three games against Washington. Anthony DeSclafani (2-4), who has lost his past four decisions, faces the Nationals’ Stephen Strasburg (3-5).

Prince is king of his court