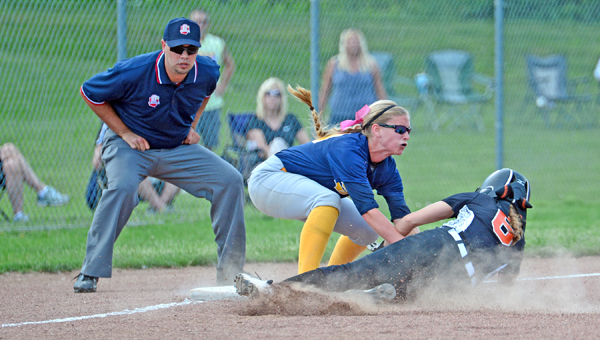 LANCASTER — The South Point Lady Pointers had put together quite a run in the postseason tournament.

For five innings on Thursday, the Lady Pointers were keeping that run in tact before things unraveled in the bottom of the sixth.

The Portsmouth West Lady Senators managed to scratch out two runs in the sixth inning to beat the Lady Pointers 2-0 on Thursday in the Division III regional semifinals.

“This was a great ending to an up and down season for us,” said Lady Pointers’ coach Tanner Heaberlin. “I am absolutely tickled to death with where we ended in the tournament and how much the girls improved over the last couple of weeks of the season.”

Hannah struck out one, did not walk a batter and gave up only six hits.

Hannah had retired 12 of 13 batters including 10 straight, but the Lady Senators pushed across the only two runs of the game in the bottom of the sixth.

Kayleigh Coleman singled to right field to end Hannah’s streak. Coleman moved up on a wild pitch, went to third on a hit by Megan Shupert and scored when the ball got through in the outfield and rolled to the fence.

Cassidy Tackett followed with a base hit to put runners on the corners and Terra Butcher’s ground out to shortstop scored Shupert.

“If you had told me that Portsmouth West would only get two runs, I would have told you we would have probably won, but it was a game of who blinked first and we did,” said Heaberlin.

“We couldn’t find a hit when we needed it tonight,” said Heaberlin.

Abbey Winkler, Haley Rawlins, Sylvia Griffith and Hannah all went 1-for-3 to account for the Lady Pointers’ hitting.

“This group of seniors got over 50 wins in their careers and made me and the community proud. They all have great futures ahead of them,” said Heaberlin.

Shupert was 2-3 with a double and run batted in to lead the Lady Senators.

Portsmouth West (20-7) will now play Wheelersburg at 3 p.m. on Saturday in the regional finals.