Cueto returning to rotation as Reds prepare to face Phils 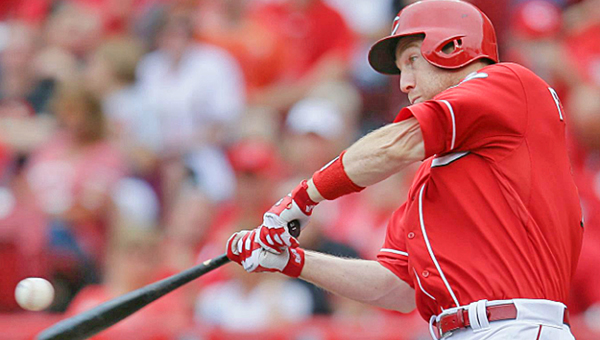 Cincinnati Reds’ third baseman Todd Frazier was named the National League Player of the Week on Sunday. Frazier led the league in hitting (.500), slugging percentage (1.227), and tied for the league lead in doubles (4) and home runs (4) while ranking second in on-base percentage (.560) and tied for third in hits (11) and runs batted in(7). He finished the week with a four-game hitting streak — all multi-hit games — as he went 10-for-15 for .667 with four doubles, three home runs and five RBI. This is Frazier’s first career Player of the Week award and the first won by a Reds’ player this season. (Courtesy of The Cincinnati Reds.com)

CINCINNATI — The Cincinnati Reds are hoping the return of Johnny Cueto to the rotation will bolster their pitching.

The return of the Reds’ offense during a weekend sweep of the Washington Nationals has Cueto hoping he’ll finally get some run support.

Cueto has missed his last two starts due to elbow inflammation but will be back on the mound Tuesday when the Reds visit the Philadelphia Phillies.

While the ace right-hander has a 3.03 earned run average, the Reds have given Cueto very little offensive support, averaging 3.17 runs this season when he pitches.

However, over the weekend the Reds scored 21 runs as the Nationals suffered their first series sweep of the season.

After losing nine straight in which they scored two runs or less on six different occasions, the Reds have won four of their last five.

Sparking the offense is third baseman Todd Frazier who was named the National League Player of the Week on Sunday. Frazier is 11-of-22 over the last six games with four home runs and seven runs batted in.

Frazier now has 16 home run, second most in the league.

“Hitting is contagious. It is the same thing with hitting with runners in scoring position. It is a mindset Let the pitches come to you and attack,” said Frazier.

Cueto had an MRI last Tuesday and results showed no structural damage. Cueto had a bullpen session on Sunday and show no ill effects of the inflammation.

“We haven’t had any setbacks since he started throwing, so I don’t think we anticipate any issues with recovery,” said Reds’ manager Bryan Price.

“But after much time off, it just makes sense to make sure the elbow doesn’t flare up.

The Reds come into the game with a seven game road losing streak while the Phillies have dropped a season-high seven in a row.

Philadelphia is 7-for-48 with runners in scoring position and the bullpen has allowed 12 runs over 19.2 innings.

Sean O’Sullivan will start for the Phillies. He is 1-4 with a 4.81 ERA and coming off a 7-0 loss to the New York Mets. He lasted just 5.2 innings and gave up 11 hits including four home runs.

The Reds have hit seven home runs in their last four games.

Although he is suffering a dismal season to date, Reds’ outfielder has seven home runs, 17 RBIs, a 14-game hitting streak and .378 batting average against the Phillies in their last 13 meetings.

Philadelphia has won 19 of the last 26 games between the two teams in Philadelphia since the 2008 season.