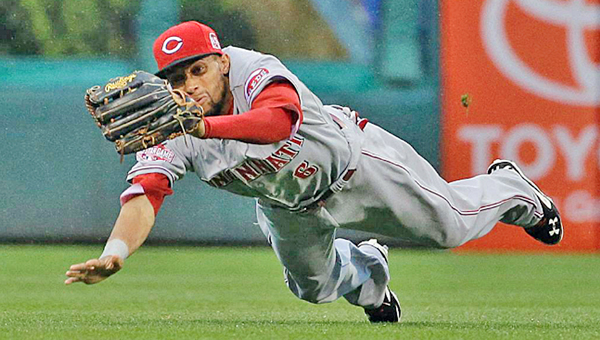 Cincinnati Reds’ centerfielder Billy Hamilton makes a diving catch in the first inning of a line drive hit by Philadelphia’s Ben Revere. The Phillies rallied to beat the Reds 5-4. (Courtesy of The Cincinnati Reds.com)

PHILADELPHIA (AP) — It was a tough night for the Cincinnati Reds’ outfielders.

Marlon Byrd fractured his right wrist when he was hit by a pitch and Jay Bruce lost a ball in the lights, leading to two eighth-inning runs in Cincinnati’s 5-4 loss to the Philadelphia Phillies on Tuesday night.

Byrd was hit on the right hand by Phillies starter Sean O’Sullivan leading off the sixth inning. Byrd reacted painfully but shook off the injury and went to first base. He was replaced in left field in the bottom of the seventh by Brennan Boesch.

The Reds looked headed to their fourth straight win and fifth in their last six before the Phillies tied it with two runs in the eighth.

Jumbo Diaz got the first two outs in the inning and looked like he had the third when Ryan Howard hit a line drive to right. Bruce was in position to make the catch but the ball went under his glove. Bruce said he lost the ball in the lights.

“I just couldn’t see it,” he said. “It was a helpless feeling. It’s frustrating and I don’t know what else I could do. Then the homer afterward put the icing on the cake.”

The play was ruled a double and Maikel Franco followed with a homer just inside the foul pole in left to tie it at 4.

Odubel Herrera led off the ninth against Tony Cingrani (0-2) with an opposite-field double to left. Herrera went to third on Carlos Ruiz’s sacrifice bunt and scored on Ruf’s broken-bat single to right.

“I had a lot of confidence in that spot with him and he came up big,” Phillies manager Ryne Sandberg said.

“That’s a tough loss,” Bruce said. “Everybody was busting their butt, and we had some momentum going.”

Joey Votto had two hits with a double and two RBIs for the Reds. Johnny Cueto returned to the mound after missing two starts due to right elbow inflammation and allowed two runs — one earned — and five hits in six innings.

Chase Utley homered and had three hits for the Phillies, who avoided tying their worst losing streak since July 2013. Philadelphia won for just the second time in the last 11 games.

The game started in a heavy drizzle and was played under a persistent drizzle throughout the chilly evening with unseasonably cool temperatures in the 50’s.

Votto followed Brandon Phillips’ game-opening single with an RBI double down the left-field line to give the Reds a 1-0 lead.

Philadelphia tied it in the second on Herrera’s RBI groundout. The run was unearned after third baseman Todd Frazier made the first of two fielding errors, both on balls hit by Franco.

Votto’s RBI single to left in the third put the Reds in front 2-1, and Cincinnati took a 4-1 lead on Zack Cozart’s RBI double and an RBI sacrifice bunt by Billy Hamilton, who batted ninth.

Bruce extended his hitting streak against the Phillies to 15 straight games with a fifth-inning single.

Cueto showed no ill effects of the injury that kept him sidelined since May 19. An MRI last Tuesday showed no structural damage and a strong bullpen session on Sunday left Cueto feeling good entering his start. The biggest scare for the right-hander might have been in the fifth inning when he had to avoid the barrel of Ben Revere’s broken bat that went flying past the mound.

DOWN NIGHT FOR FRAZIER

In addition to the two errors, Frazier, the reigning NL Player of the Week, cooled off at the plate by going 0 for 5. Frazier entered 11 for 22 with four homers in his last six games.

Reds: RHP Mike Leake (2-4, 4.66) takes the mound for Cincinnati on Wednesday night looking to improve his career mark against the Phillies. Leake is 1-5 with a 7.41 ERA in six career starts against the Phillies, including 0-2 with an 8.53 ERA in two starts at Citizens Bank Park.

Phillies: LHP Cole Hamels (5-4, 2.91) starts Wednesday night. The Phillies’ ace has owned Cincinnati throughout his career, going 9-0 with a 1.51 ERA in 12 starts against the Reds.