Poultry banned due to flu scare

ROME TOWNSHIP — The animals will stay home, but that doesn’t mean a group of 4-Hers can’t participate in this year’s fair.

On Tuesday the state’s agriculture department determined that all poultry shows at both state and county levels will be canceled because of the threat of the deadly avian flu.

“The avian influenza virus has not been reported in Ohio, but neighboring states have tested positive,” Dr. Mike Dyer, county fair veterinarian, said. “This is a regional issue. It is pretty deadly. Chickens are probably hit the hardest.

About two weeks ago, 29 4-Hers picked up their chicks to raise them for the poultry contest. Now those animals are banned from the fair grounds.

Fair board officials, however, have come up with an option for the youth to salvage those projects.

They will be required to produce progressive photos of their chicks’ growth which will be mounted on poster board.

“They will also do a skillathon that is something that the state does where they ask questions about feed, medication, care,” Randall Lambert, fair board president, said. “It is prepared by the Ohio State extension office and they will have to study their project books.”

There will also be the showman part of the exhibition where judges quiz the 4-Hers on breeds, parts of the chicken and care.

“The judge will still be there to do interviews, but they won’t have to show,” Lambert said.

The fair board is also coming up with some type of compensation for the youth since they won’t be bringing their projects to auction.

“They will be awarded expenses in lieu of the auction since we couldn’t place the chickens,” Lambert said.

The statewide ban, which also affects swap meets, is to protect the food supply for the country.

“It is kind of sad, but an important life lesson about hygiene and animal husbandry,” Dyer said. “It is something to protect the poultry flock. They are learning they are raising a food source. Someone will eat my project. We are trying to protect the kids who have worked hard. At the same time we have to be responsible with the health of the entire flock.”

The extension office is sending out a letter to all those who signed up to show poultry, whether it is chickens, ducks, turkeys or the exotic breeds.

After the fair the 4-Hers can either sell the chickens to a harvesting plant or they can harvest the animal at their farm, Lambert said. 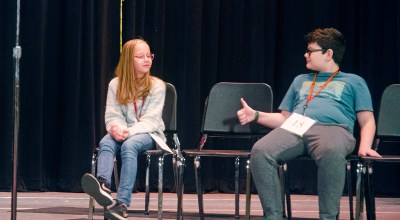 17 rounds to win (WITH GALLERY)