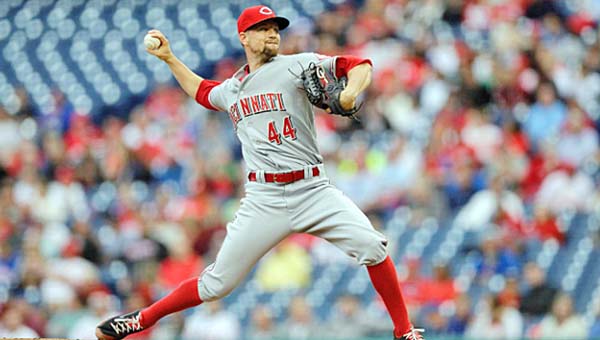 Cincinnati starting pitcher Mike Leake pitched 6.2 hitless innings and eight-plus scoreless innings on Tuesday, but the Reds blew a 4-0 lead and lost 5-4 to Philadelphia in 11 innings. (Courtesy of The Cincinnati Reds.com)

PHILADELPHIA (AP) — Mike Leake lost a no-hit bid in the seventh inning but went to the mound in the ninth looking for his first career shutout, only to watch a four-run lead disappear.

Cody Asche scored from second base on a fielding error by pitcher Ryan Mattheus in the 11th inning, lifting the Philadelphia Phillies to a 5-4 win over the Cincinnati Reds on Wednesday night after Maikel Franco hit a tying, three-run homer off Aroldis Chapman in the ninth.

Franco lined a single up the middle with two outs in the seventh for the first hit off Leake. But he retired the next four batters before allowing consecutive singles by pinch-hitter Ben Revere and Jeff Francoeur in the ninth.

In the 11th, Asche hit a double down the left-field line off Mattheus (0-1) with one out. Freddy Galvis then hit a grounder to first baseman Joey Votto. Mattheus covered the bag, but couldn’t catch the toss and Asche came around to score.

“I should’ve made the play,” Mattheus said. “I’ve practiced it so many times. There’s no excuse for it.”

The Phillies have two straight walk-off wins after losing seven games in a row.

Seeking his first shutout in 153 starts, Leake exited with two runners on and a four-run lead.

Center fielder Billy Hamilton helped Chapman with a diving catch on Chase Utley’s liner to left-center that was a sacrifice fly. After Ryan Howard walked, Franco hit a 98 mph fastball way out to left-center.

Chapman had converted 29 straight save chances, dating to last year, and was 9 for 9 this season before blowing his first since June 28, 2014. His streak was the longest active one in the majors.

“The guy had a one-hit shutout with one of the best closers in the game behind him,” Reds manager Bryan Price said, explaining his pitching decision in the ninth.

Luis Garcia (2-1) worked a scoreless 11th to earn the win after allowing a leadoff double to Votto.

Philadelphia starter Cole Hamels gave up two runs and six hits, striking out eight in seven innings. He remained 10-0 against the Reds, including playoffs. The ace lefty was a hard-luck loser last Friday when the Phillies were no-hit for 7 1-3 innings by Colorado’s Chad Bettis in a 4-1 loss.

Leake was 0-3 with a 12.86 ERA in his previous three starts, but he dominated the Phillies. Leake retired his first 11 batters before walking Utley on a close 3-2 pitch. He hopped off the mound, thinking it was strike three. Leake also walked Carlos Ruiz in the sixth.

Brandon Phillips hit a two-run single to give the Reds a 2-0 lead in the fourth. Votto hit a two-run homer off Jake Diekman in the ninth, driving it 428 feet the opposite way to the left-center seats for a 4-0 lead.

Reds first base coach Billy Hatcher dove out of the way on a wild throw by Franco after Zack Cozart hit a grounder to third in the ninth.

Chapman hadn’t allowed a run in a save situation in his last 27 attempts. He went 74 1-3 innings without giving up a homer before Franco connected.

Reds: LF Marlon Byrd was placed on the 15-day disabled list after he broke his right wrist when he was hit by a pitch from Sean O’Sullivan on Tuesday night.