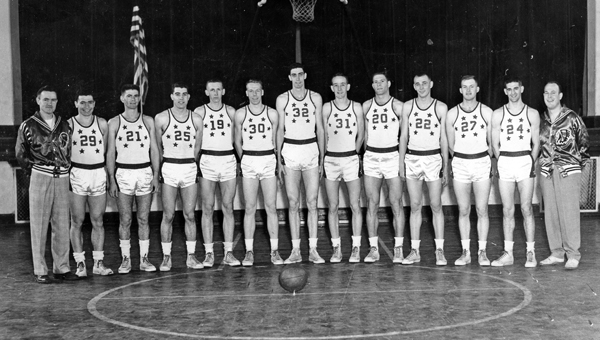 Bevo Francis (32) was the key player for the 1953-54 Rio Grande basketball team that was showcased against some of the finest teams in the nation and enjoyed enormous success. Francis — the most famous athlete in Rio Grande history — died Thursday at age 82. (Photo submitted)

Francis, who was enshrined in the National Association of Intercollegiate Athletics (NAIA) Hall of Fame in April 2012, led the then-Redmen to a perfect 39-0 record during the 1952-53 season and rewrote the NCAA and NAIA record books in the process.

The Hammondsville, Ohio native averaged 50.1 points per game in the first of his two seasons at the tiny school of just 92 full-time students located in southeastern Ohio, scoring a national-record 116 points in a 150-85 win over Ashland (Ky.) Junior College on Jan. 9, 1953.

While the NAIA recognized Francis’ season scoring average and his single-game scoring mark, the NCAA announced retroactively that it would allow only the games played against four-year, degree-granting institutions to be recognized — a decision which lowered his season average to 48.3 points per game and erased his 116-point outing.

The following season, Rio Grande head coach Newt Oliver took Francis and his teammates on the road for nearly every game and tangled with the likes of high-profile NCAA schools such as Villanova, Providence, Miami-Fla., North Carolina State, Wake Forest and Creighton University.

The Redmen packed gymnasiums throughout the country, including Madison Square Garden in New York City for a meeting with Adelphi and the Boston Garden.

Against the slate of higher-regarded foes, Francis averaged 47.1 points per game and scored an NCAA single-game record 113 points in a 134-91 triumph over Hillsdale (Mich.) College on Feb. 2, 1954 — a mark which stood until 2012 when Jack Taylor of NCAA Division III Grinnell College scored 138 points against Faith Baptist Bible.

“The Rio family has suffered a great loss. Bevo will be truly missed,” said Jeff Lanham, the Director of Athletics at the University of Rio Grande. “Bevo was a great individual scorer, but he never failed to say that he couldn’t have scored a point if it weren’t for the fact that he had great teammates. He was always concerned about how Rio was doing and was a fantastic supporter for 60-plus years.”

Francis and his teammates are widely credited with keeping Rio Grande’s doors open as a result of the financial guarantees that Oliver was able to secure by taking his team on the road for its high-profile games during the 1953-54 season.

“Bevo’s legacy, at least in part, is that dedication, determination, and heart can change the world. Bevo and coach Oliver’s team charted a course for our institution that led us out of a sea of challenges toward a positive future,” said Dr. Michelle Johnston, President of the University of Rio Grande and Rio Grande Community College.

“Our hearts go out to Bevo’s family, former coaches and teammates, friends, and fans. As much of a standout, talented athlete that Bevo was, he cared deeply about his team and the expectations of his coach.”

Francis finished with 3,272 points in his two seasons at Rio Grande, leading the Redmen to a 60-7 overall mark. He scored 50 or more points 14 times in his 39 games against four-year colleges and his 46.5 ppg average in games recognized by the NCAA during the 1953-54 campaign remains a single-season record.

However, rather than returning to Rio Grande for his junior season, Francis — who was married and the father of one when he enrolled at the school — opted to sign a contract with the Harlem Globetrotters and was assigned to the Boston Whirlwinds, one of the teams which barnstormed the country at the time with the Globetrotters.

In 1956, Francis was drafted in the third round by the NBA champion Philadelphia Warriors, but turned down their contract offer. He spent the final years of his playing career in the Eastern Professional Basketball League before returning home in 1962 to begin working in a nearby steel mill.

“Bevo Francis was Rio Grande’s greatest ambassador. He was the most humble man and this loss reaches much further than our history,” current Rio Grande men’s basketball head coach Ken French said.

“Bevo was active within our program over the years and always went out of his way to support or provide anything that was needed. Bevo meant much more to us than being college basketball’s most prolific scorer. Our thoughts and prayers are with Jean and his family.”

Francis is survived by his wife, Jean; a son, Frank; and a daughter, Marge.

OAKLAND, Calif. (AP) — The frustration on Kyrie Irving’s face was evident as he spoke to the media and then... read more