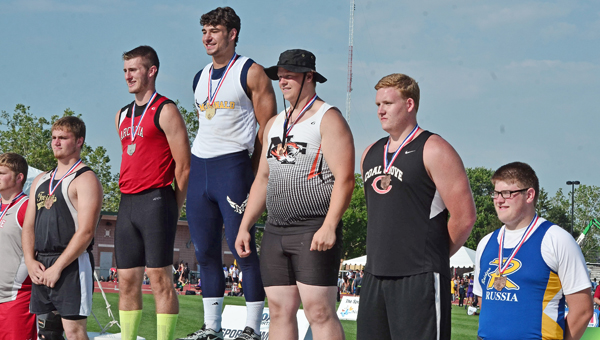 Coal Grove’s Austen Pleasants (second from right) displays his medal for a fifth place in the Division III discus event as he stands on the awards’ podium. (Jimmy Walker/The Ironton Tribune)

COLUMBUS — It might not have been Austen Pleasants’ best effort, but it was still pretty darn good.

Pleasants lamented the fact he had thrown 172 feet in practice during practice prior to the state meet.

“It really wasn’t my best. I got 172 in practice and I really wanted to get one out there and show them how far I could throw. But you don’t always have your best day,” said Pleasants.

Christian Smith of McDonald threw 191-2 to win the event. Shae Watkins of Acadia was second at 169-10 and Bucyrus Palo of Newton Falls was third at 168-1.

“Austen is a fine young man and a hard worker. I know he wishes he could have done a little better, but that’s the competitor that he is. He expects more out of himself. But that doesn’t diminish what he accomplished. He had a great day,” said Hornets’ coach Jay Lucas.

The appearance marked the second straight trip to the state meet for Pleasants, but this time he came away with a trip to the awards’ stand. He said last year’s experience played a major role in his performance this time.

“I had a pretty good day. I came in last year and I didn’t make the finals, so this year I wanted to place in the top five and that’s what I did. I came here and did what I had to do to get where I wanted to be,” said Pleasants.

“This year I was more comfortable. Coming in I knew what to expect. (The Ohio State) cage extends out into the sector and I wasn’t really used to that last year. Coming in and being able to see that last year and get experience in a ring like that really helped me.”

Pleasants — who has signed to play football at Ohio University — said the finish capped a great career.

“I’m just shocked and amazed and so blessed to be here. I’m absolutely happy and thrilled,” said Pleasants.