Summertime fun means help for others 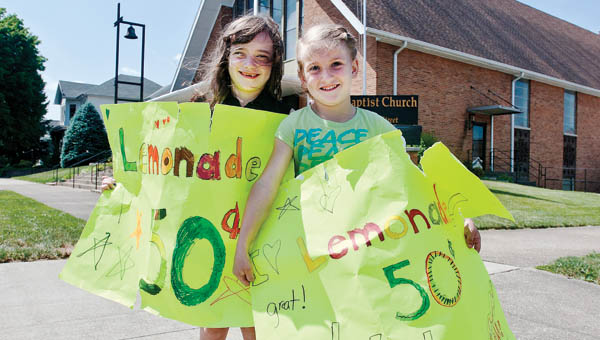 The summertime treat of lemonade has gotten a sweeter taste for some youth at First Baptist Church of Ironton.

Last week members from the church’s youth ministry were out front of the church selling lemonade and iced tea. Their mission was two-fold — to cool off passers-by they may or not know and help others they most probably will never meet.

About two years ago Stephanie Kettel, a member of First Baptist, went on a missionary trip that took in 11 countries in 11 months. While she was in Romania, her parents, Ron and Laura Kettel, joined her for mission work.

What they brought back from that trip resulted in a relationship between First Baptist and a church there. Among the work in Romania is building greenhouses for growing crops and chicken coops for meat and eggs to enable those impoverished to become self-sufficient.

“What our children’s ministry has taken on is to raise enough money to put a chicken coop at that church,” Eric Barnes, pastor of First Baptist, said. “They would raise enough not only to build the chicken coop, but it would also supply it.”

The goal is to raise between $400 and $500 for the children’s group that is for grades first through fifth.

“They are having a great time and the community response has been super good,” Barnes said.

Teaching the children about how they can contribute to their community is among the lessons they are learning in this project.

“We think it is highly important they have a ministry now, that they don’t have to wait until they are older,” Barnes said. “We are thrilled to help them have an active ministry. They know they are here to serve, not just believe.”