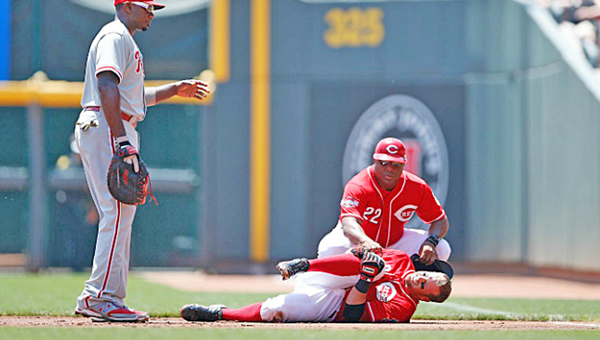 Cincinnati Reds’ shortstop Zack Cozart grabs his knee in pain after being injured during the first inning while running out a ground ball. Cozart is expected to go on the disabled list. The Reds beat the Philadelphia Phillies 5-2 to complete a three-game sweep. (Photo Courtesy of The Cincinnati Reds)

CINCINNATI (AP) — The Reds lost another one of their top players, with the All-Star Game only a month away.

Ivan De Jesus Jr. homered for the second time in three games, and the Reds swept the Philadelphia Phillies with a 5-2 victory on Wednesday after shortstop Zack Cozart injured a knee.

Cozart twisted his right ankle and knee as he tried to beat out a grounder in the first inning. He crumpled to the ground, rolled on his back and grabbed the knee, wincing in pain. He didn’t put any weight on the right leg as he was helped off the field and taken for an MRI.

The team didn’t have the test results as it headed for a four-game series against the Cubs in Chicago.

“It’s safe to say he’ll be going on the DL,” manager Bryan Price said. “It’s heartbreaking is what it is, to see him come off the field like that. Certainly, you don’t want to see that at any time, but he was having a phenomenal year.”

Cozart’s injury overshadowed the Reds’ first sweep of Philadelphia since 2013. He’s among the NL’s top shortstops in numerous offensive categories. Cozart had homered in three of his last four games, leaving him with nine homers and 28 RBIs.

He’s also the Reds’ second-leading candidate for the All-Star Game that will be played in Cincinnati. Only third baseman Todd Frazier has gotten more fan votes.

“It’s terrible, especially since he was tearing it up and playing Gold Glove defense,” Frazier said. “It’s really a shame. He had a great shot at making (the All-Star Game). I feel for him.”

The Phillies fell to 7-23 away from Citizens Bank Park, their worst road record after 30 games since 1941. They have lost seven straight on the road — their worst such slump in two years — and have been swept three times in their last five series.

De Jesus, a 28-year-old utility player, hit his first career homer in the series opener, a tiebreaking two-run shot for a 6-4 win. His three-run homer on Wednesday off Jerome Williams (3-6) made it 4-0 in the first inning, the Reds’ sixth homer in two games.

Jon Moscot (1-1) got his first win in his second major league start. The 23-year-old right-hander gave up two runs and six hits in six innings. Aroldis Chapman retired the side in the ninth for his 12th save in 13 chances.

Brayan Pena singled four times and drove in a pair of runs. Joey Votto singled in four at-bats a day after his three-homer game.

Frazier extended his hitting streak to five games (12 for 22). He has four doubles and a homer during the streak. … Pena’s four hits matched his career high. He also had four hits against Cleveland in 2012.

Frazier reached over the railing in front of of the Phillies’ dugout to make a backhand catch of Odubel Herrera’s foul in the first inning, with Pena grabbing his legs to prevent him from falling in.

Phillies: Third baseman Maikel Franco fouled a ball off his right foot during his first at-bat and was in a lot of pain. He walked it off, remained in the game, and singled in his last at-bat, extending his hitting streak to nine games.

Reds: Second baseman Brandon Phillips is day-to-day with a strained groin, injured in a slide into third base on Tuesday night. Center fielder Billy Hamilton was out of the lineup for the second day with a sore left hand.

Phillies: Following a day off, Philadelphia opens a series in Pittsburgh. Kevin Correia, who signed on Monday, makes his Phillies debut.

Reds: Michael Lorenzen (1-1) opens a four-game series at Wrigley Field, looking for his first win since May 5.

Dellavedova out of hospital, ready for Game 4

CLEVELAND (AP) — Matthew Dellavedova walked into the interview room double-fisted — with two cups of water. After being hospitalized... read more