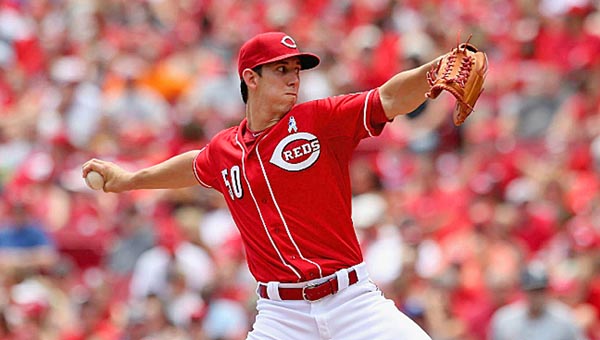 Cincinnati starting pitcher Michael Lorezen was sick but still threw seven innings of two-run baseball as the Reds beat the Miami Marlins 5-2 on Sunday. Lorenzen was pitching in a MLB game for the first time with his father watching. (Courtesy of The Cincinnati Reds.com)

CINCINNATI (AP) — The Reds’ hottest hitters were at it again, helping a sick starter pull through a tough day.

Todd Frazier and Jay Bruce each hit a two-run homer on Sunday, leading the Cincinnati Reds to a 5-2 victory and another successful series against the Miami Marlins.

The Reds took two of the three games, with the teams trading shutouts before the series finale. The Reds have won 11 of their last 15 games against the Marlins.

Rookie Michael Lorenzen (3-2) went seven innings and singled home a run while winning back-to-back starts for the first time in his career. He was sick on Saturday night, but matched his career high for innings.

His father, Clif, was in the stands, watching him play in the majors for the first time.

“I felt pretty bad all day,” the right-hander said. “I woke up and my throat was really sore. It felt like it was closed up and I had these body aches. It was a battle out there today.”

Lorenzen struggled in the first inning, when he gave up a pair of hits and a run. He was able to pull through on a muggy, 85-degree afternoon.

“After the first inning, Michael settled down and pitched a great game,” Bruce said. “It was nice to get some separation there and finish the series off.”

Frazier connected in the first inning against David Phelps (4-4) for his fifth homer in the last five games.

Frazier has 23 homers, two behind Miami’s Giancarlo Stanton for the major league lead. Fifteen of his homers have come at Great American Ball Park.

Bruce’s 11th homer in the sixth inning snapped a 2-2 tie and extended his hitting streak to five games. He is 10 for 20 during the streak with a pair of homers.

Aroldis Chapman escaped a bases-loaded, none-out threat in the ninth, getting three strikeouts for his 15th save in 16 chances.

Dee Gordon opened the game with a single, stole second, advanced on Derek Dietrich’s single and scored on Stanton’s groundout, the outfielder’s major league-leading 64th RBI. Justin Bour led off the second inning with his sixth homer, tying it at 2.

The Marlins had an aggressive play turn into an out at the plate in the fifth. Gordon singled, and Dietrich followed with a double off the base of the wall in center. Third base coach Lenny Harris sent Gordon, who slid headfirst into the plate but was tagged for the first out of the inning.

Cincinnati’s Marlon Byrd had three singles and grounded into a double play. In his first three games back from a broken right wrist, the left fielder was 4 for 11 with a solo homer.

Chapman extended his streak of converting 52 consecutive save chances at Great American since September 2012.

Marlins: Gordon shook his head several times after he was tagged on the left side of the face by catcher Brayan Pena has he tried to score in the fifth. Gordon stayed in the game.

Reds: CF Billy Hamilton was hit on the top of his left foot by one of Phelps’ pitches as he tried to bunt in the second inning. He was in pain as he headed to first base but stayed in the game.

Reds: Following a day off, they open a series in Pittsburgh. Johnny Cueto (4-4) is 18-4 career against the Pirates, winning his last seven decisions against them since 2012. Jeff Locke (4-3) starts for Pittsburgh.