Their new home is cats’ meow 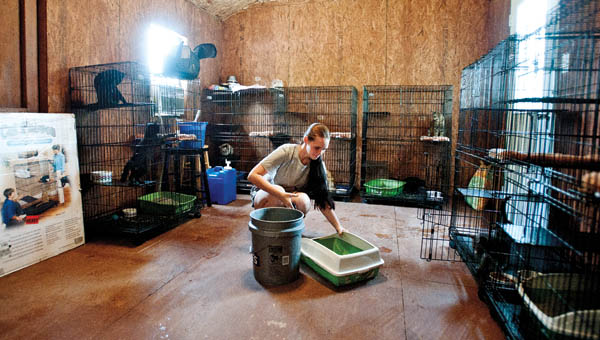 Volunteer Destiny Pruitt cleans up up the cat barn at the Lawrence County Animal Shelter Saturday.

No longer are they stuck in the garage. The feline transients who come to stay, hopefully for not very long, at the Lawrence County Animal Shelter, now have their own special place. Sort of like cat condos.

All thanks to the volunteers at the shelter and those in the community who support its efforts of rescue.

The separate housing for the cats that come into the shelter has been a longtime dream of those who work there, according to shelter volunteer Melissa Nicely.

Pledges enabled the shelter to finance the $10,000 cost of the building that houses all cats, except for the tomcats. They are still kept in the garage until a facility can be built for them.

In a money-saving effort, the shelter staff had planned to build the cages themselves.

“But we got enough donations to buy all brand new cages,” Nicely said. “We have all brand new litter pans, food and water bowls.”

The cages are 50 inches tall, 3-foot-wide and 2-foot deep with three shelves so the cats can get some exercises jumping around.

“There are two sections to the doors so no matter where the cat is we can get in,” she said.

Each cage can house two adult cats or a mother with her litter.

“I am so glad the majority of the cats are out of the back, especially the mama cats with their babies,” Nicely said. “They seem so much happier and they are not as stressed. They have room to move around. They can jump.

“This has been an idea we had about a year ago and have been working on it for the past seven months. I am so happy the majority are out of the back and have their own personal space.”

With all efforts focused on getting the cat shelter up and running, Nicely said they are in need of some of the basic necessities.

“We are running a little low on cat litter,” she said.

Next on the list of big-picture items is trying to raise money for a van used in the rescue efforts of the shelter.

“We are hoping to get a transportation van that has air-conditioning,” she said.

Right now the shelter uses Nicely’s truck that can take up to 30 animals at a time rigged with a fan to provide circulation.

Dog rescues, like adoptions, run higher than those for cats.

That is another reason why the shelter staff is so happy about the new housing for the cats.

“They are having a heyday,” Nicely said. “It has been a roller coaster but they are in there now and have a lot of prime space. It is air-conditioned. We will have a heater in the winter. They have it good out there as far as space. And it is a little more welcoming for the adopters.”