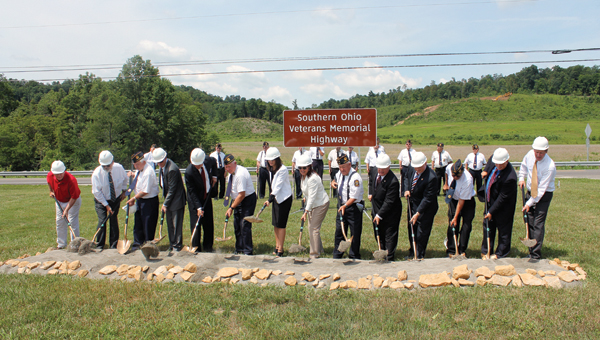 MINFORD — Almost like a mantra to progress, the roar of the bulldozers digging up and down the nearby hillside played a non-stop staccato as the dignitaries spoke above the din.

At 11 a.m. Wednesday they gathered, by noon it was official — the start of the Southern Ohio Veterans Memorial Highway, a road that took a half-century of talk before the first dirt was tossed.

A dais of international and state notables came out to the groundbreaking ceremony in Minford on the first public-private partnership the state of Ohio has joined, all to make a 50-year-old dream became a reality.

“This is so much more than a construction project,” Lt. Gov. Mary Taylor told the audience. “It is an opportunity for the community, for families.”

The memorial highway, AKA the Portsmouth Bypass, will be a 16-mile, 4-lane divided highway stretching from north of Lucasville to Wheelersburg, bypassing U.S. 23 and U.S. 52 at those points.

Its goal is to streamline transportation into southern Ohio to open the region up to industries needing a quick way to get their product in and out.

“This is more than a road,” Rep. Terry Johnson, R-90, said. “It is bringing us together. This is for our kids. It will move us all forward. It will provide jobs.”

In fact, the immediate effect is construction will add 350 temporary jobs for the almost three years it will take to build the road.

Then, economic development leaders are banking on the highway attracting a plethora of companies to add permanent jobs to southern Ohio.

“This will create jobs and wealth for our area,” Scioto County Commissioner Bryan Davis said. “We must prepare now … for infrastructure and improvements.”

Creating a Portsmouth Bypass was first talked about during the first term of Gov. James A. Rhodes in the early 1960s.

“It was a lot of thinking, talking,” Matthew McAuliffe, Ohio Department of Transportation, chief of staff, said.

The highway remained in that state until a few years ago when officials thought the only way to build it was section-by-section following a massive budget crunch facing the administration of Gov. John Kasich.

That’s when the state reached out to the concept of private partners to finance the project, a method used in 33 other states.

For this project, those partners are ACS Infrastructure Development, InfraRed Capital Partners and Star America Capital. Upon completion of the highway, the private partners will retain ownership until the end of a 35-year operation and management agreement. At that time, ownership will revert to ODOT.

“We took an innovative approach to bring this to fruition,” Taylor said.