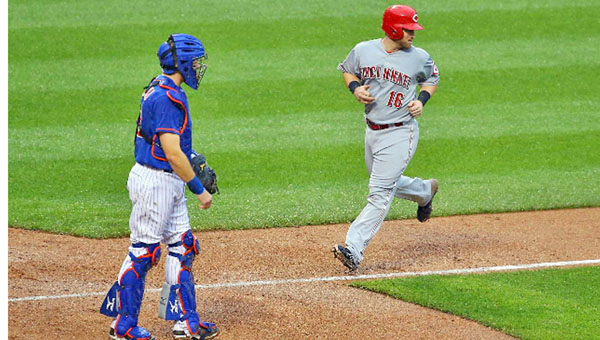 Cincinnati Reds’ catcher Tucker Barnhart (16) scores on a double by Brandon Phillips in the fifth inning of Saturday’s game. The Reds and New York Mets were tied 1-1 when the game was suspended. (Courtesy of The Cincinnati Reds.com)

NEW YORK (AP) — Held down by Matt Harvey in the rain, the Cincinnati Reds still have a chance to win Saturday’s game on Sunday. For that, they can thank Manny Parra.

Harvey stayed steady on a slick mound and Curtis Granderson homered again for the New York Mets before their game against Cincinnati was suspended after six innings Saturday with the score tied 1-all.

Brandon Phillips had an RBI double for the Reds, giving him a hit in all 31 road games he’s played against the Mets. Rookie right-hander Michael Lorenzen matched Harvey most of the way and received relief help from Parra, who retired Granderson on a 3-1 pitch with the bases loaded to end the sixth.

“That was one ball away from this game probably being over,” Cincinnati manager Bryan Price said. “He came through big-time.”

With the field already wet and rain getting heavier, the umpires stopped play and signaled for the tarp. More showers were in the forecast at night, and the game was called following a 53-minute delay. All statistics count.

“It was really tough,” Lorenzen said. “In the minor leagues you pitch on some tough mounds, too, so that’s all that was going through my mind was, keep the team in the baseball game as long as possible.”

The game will resume Sunday at 1:10 p.m. with the top of the seventh inning before the teams play their previously scheduled series finale. Carlos Torres was announced as New York’s initial reliever after Harvey was pulled for a pinch-hitter in the sixth.

“We’ll be hoping to win it in nine innings and I’m sure they’re thinking the same thing, so you’re a little more loaded with bullpen options in game two,” Price said.

Granderson went deep for the fifth time in seven games, a drive to left in the third that marked his first opposite-field homer since Sept. 9, 2012, with the Yankees at Baltimore.

It was his 250th career home run and team-high 13th of the season. Problem for the Mets is, 11 of those home runs by their leadoff hitter have been solo shots.

“He’s swinging great. If we didn’t have him, we’d have a tough time scoring,” manager Terry Collins said. “I just hope he stays hot for a while because we’ve got to get the other guys going.”

Granderson tried to make a sliding catch in shallow right on Tucker Barnhart’s bloop double leading off the fifth, but the ball popped out of his glove.

One out later, Phillips doubled to left-center. He was stranded when Harvey struck out sluggers Joey Votto and Todd Frazier.

“Definitely a play I should have been able to make,” Granderson said.

Harvey has rebounded from a rough patch to allow only two runs over his last three starts. The right-hander was 1-3 with a 7.20 ERA in his previous four outings.

“They did a great job of keeping the field dry as much as they could,” Harvey said. “I was kind of surprised they kept the game going at certain points.”

Cincinnati put two runners in scoring position against Harvey with one out in the second. Ivan De Jesus Jr. lined out to Granderson in right, and Marlon Byrd held at third after slipping on the bag as he tried to hustle back and tag up.

With the bases loaded, Lorenzen flied out to deep right-center on a 3-1 pitch.

“It wasn’t easy for anybody,” Price said. “The hitter’s got water dripping off the brim of their helmet and the pitchers are trying to feel the ball, and every ball that’s put in play is slick. Outfielders are looking up in the rain. I don’t know where the advantages are. It could have as easily been a 10-9 game as a 1-1 game.”

Mets: Ruben Tejada was back in the lineup at third base. Tejada left Friday night’s game with a bruised left elbow after he was hit by a pitch. … INF Daniel Murphy (strained left quadriceps) had two hits and two RBIs in his latest rehab game for Class A St. Lucie. He played nine innings at third base. The Mets hope to have Murphy back by Tuesday, Collins said.

Byrd started in center field for the first time since May 3, 2013, with the Mets, according to STATS.

The series finale will begin 30 minutes after the suspended game ends on Sunday. The postgame concert by Steve Miller Band initially scheduled for Saturday was moved to Sunday following the second game, weather permitting.

Mets: Prized pitching prospect Steven Matz estimated he could have close to 100 family members and friends in attendance for his big league debut Sunday in the originally scheduled game. Matz grew up on Long Island, about 50 miles east of Citi Field.

a-walked for Harvey in the 6th.