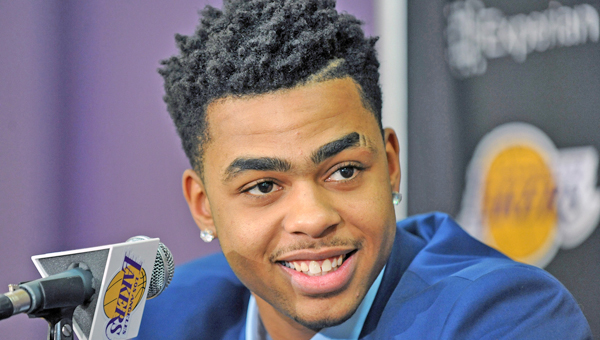 EL SEGUNDO, Calif. (AP) — D’Angelo Russell was the No. 2 pick in the NBA draft, and he chose the No. 1 jersey with the Los Angeles Lakers.

The point guard from Ohio State clearly isn’t trying to hide from those enormous expectations resting on his 19-year-old shoulders.

When he accepted that gold uniform from general manager Mitch Kupchak on Monday, Russell welcomed the blinding Hollywood spotlight trained on him as he attempts to restore the Lakers to championship contention.

“I consider myself the top basketball player in the draft,” Russell said when asked if his athleticism matched the best players in his draft class. “If that’s me being the most athletic guy or non-athletic, I’m going to get the job done.”

With some help from his fellow draftees, the rest of the Lakers’ young core and Kobe Bryant, Russell has a chance.

Three days after Russell became the Lakers’ highest draft choice in 33 years, he was formally introduced at their training complex along with fellow picks Larry Nance Jr. and Anthony Brown. All three rookies are hoping they’ll be big parts of a reboot for a proud franchise coming off its worst season.

Russell and Nance have already spoken to Bryant, the five-time NBA champion who will return in the fall for at least one more season. Russell already appeared to be reflecting his new mentor’s ethos when he emphasized his mental toughness and determination — two attributes that Bryant has redefined in Los Angeles.

“I’ve always been a guy that was overlooked, so I respect my work ethic,” Russell said. “(The Lakers) are not used to getting a top-five pick, so the expectations are high. I’m happy. My mentality is, learn from the best and just keep working and grinding.”

Russell said he was “extremely shocked” to be chosen at No. 2 by the Lakers, although he later clarified that the draft-night process was more shocking to him than his destination. Russell repeatedly referred to himself in underdog terms, citing his rise from his native Louisville to a private prep school in Florida to a single season in Columbus.

“It forced me to mature at a young age,” Russell said. “I moved out there at the age of 15. I was in a boarding situation, so I had to do my own laundry, all these other things that guys had to do when they get to college.”

Russell realizes the Lakers face a long road back from their 21-61 season, but he doesn’t have to do it alone.

Shortly before the three new Lakers were introduced, Julius Randle went through a spirited workout at the other end of their practice court, culminating in an alley-oop dunk. The power forward from Kentucky was the seventh overall choice in last summer’s draft, but was lost for the year after breaking his leg in the season opener.

The Lakers also have Jordan Clarkson, the second-round pick from Missouri who made the NBA’s all-rookie first team last season as a point guard.

Russell’s arrival should allow Clarkson to play a more natural role as a shooting guard, but neither youngster seems particularly interested in labels and positions. Russell watched Clarkson play in college, and he sees no reason they can’t play together.

“I really want to be known for working hard, and then let the Showtime come along,” Russell said. “These guys aren’t used to losing. This is one of the most winningest franchises ever. Showtime usually comes with winning, so when we can win games, that’s when it will start being fun. I feel like we’ll grow together. The chemistry we build on and off the floor will just help us grow together.”