YEA Health Fair offers resources to parents and their children 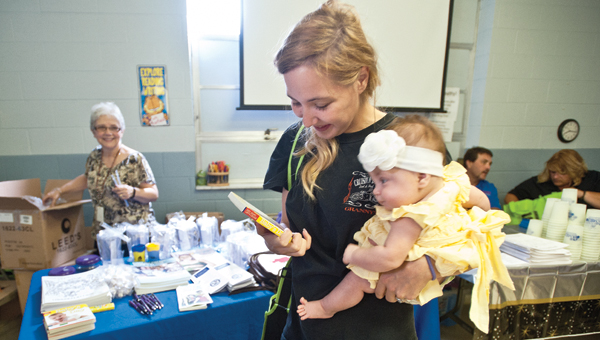 Stevens said the fair was “a big fun day,” showing parents and students that organizations like YEA and CAO are there to offer a helping hand when it’s needed.

“We just want to be here for the community,” said Stevens, who said the turnout at Tuesday’s event was “tremendous” right from the start.

Vendors handed out coloring books and stickers to the children at the event, Patti Deer, who works for the city health department, wanted to tell the young people about the hazards of drugs.

“We want the kids to be safe,” she said.

Deer pointed out that the information youngsters get at the health fair is valuable to them and their parents.

“If you give them the information, they’re going to go tell their parents,” said Deer.

The success of the YEA Health Fair was thanks in part to a dedicated team of young YEA workers. YEA is a CAO organization involving local teens who serve as positive role models and mentors for at-risk youth. The program aims to keep youth off the streets and out of trouble by offering alternatives to risky activities that they might get involved in.

Stevens, who works with YEA through CAO and helps plan YEA summer activities, said that YEA is a way to help at-risk youth make good decisions and plan for their futures.

YEA is a way “to help kids have something in the community that makes them feel important,” said Stevens.

Part of making students feel valued is providing them with mentors through YEA.

For Hannah Thomson, a recent high school graduate who has helped with YEA for several years, said the program is a way to “teach kids about values (and) self-esteem.” Thomson said being part of the YEA staff has taught her leadership skills and how to set a good example for the younger students she met.

“It’s good to be a role model for them,” she said.

Thomson pointed out that the YEA staff has the opportunity to teach children to work hard and accomplish tasks. When children complete chores or other assigned tasks, they are awarded points as determined by the staff.

Josh Ison began working as a youth staff member six years ago, and in that time he has gotten to see the fruits of YEA staff’s labors.

“I like working with the kids,” said Ison. “Some of these kids I’ve been with for years.”

Over years, Ison has attended graduations for the at-risk students who have gone through the YEA program. Along with YEA staff, Ison has seen positive results in the lives of those mentored by staff.

“We give them positive role models, positive thinking,” said Ison.

Local teens who want to get involved as mentors with YEA can find out more about the program through guidance counselors at their schools.

Will PO get approval?

Sheriff to see if any funds there for jail move   Sometime today Lawrence County Sheriff Jeff Lawless should get... read more