Reds try to stay ahead of Brewers 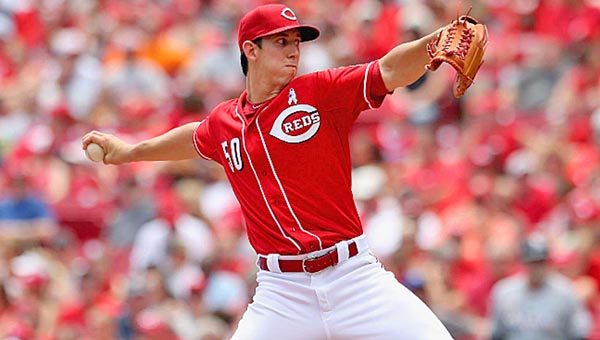 Cincinnati rookie pitcher Michael Lorenzen will go against the Milwaukee Brewers on Friday as the Reds begin a three-game series. The Reds are looking to remain ahead of the Brewers in the NL Central Division standings. (Courtesy of The Cincinnati Reds.com)

CINCINNATI (AP) — After digging itself an insurmountable hole through 81 games, the second half of last-place Milwaukee’s season is going to be one of minor battles.

It begins fittingly Friday night in Cincinnati where the streaking Brewers will try to continue closing the gap between themselves and the fourth-place Reds.

The Brewers are within five games of Cincinnati after their first sweep since taking three at the Los Angeles Dodgers from Aug. 15-17.

Gerardo Parra is batting .382 in 14 games, Jonathan Lucroy was 8 for 15 in the series, Ryan Braun is 13 for 28 in his last seven and Adam Lind is hitting .405 in 12 to give the club promising stretches from its top-four hitters in the order.

Mike Fiers will try to keep it going on the mound. Fiers (3-7, 4.14 ERA) didn’t earn the decision in a 5-3 home win over Minnesota on Sunday, though he limited the Twins to a run and four hits in seven innings.

The right-hander has dropped three straight starts against Cincinnati with a 6.75 ERA while never making it beyond five innings. The latest was the worst with Fiers giving up eight runs — four earned — and six hits with three walks in four innings of a 16-10 defeat on April 21.

Todd Frazier and Jay Bruce homered, and Frazier is 5 for 13 with two home runs and a double against Fiers. Billy Hamilton (0 for 6) and Brandon Phillips (2 for 13) have struggled.

Hamilton is 5 for 11 in three games to boost his average to .230 for the first time since April 26, and he’s also gaining bunting confidence to get on base and use his speed.

“I’ve learned the placement (of) the bunt is way better than my speed,” Hamilton told MLB’s official website. “You put a bunt down in an area where they can’t get it, it’s way better than running out of there and having a bad bunt.”

They’ve won their last three home series of more than a game with a victory over Detroit sprinkled in and have taken 12 of 16 at Great American Ball Park while scoring 5.8 runs per game and batting .305.

The Reds have also taken the last three series with Milwaukee, including five of seven games this season. In Cincinnati, the Reds have won all four series since the start of 2014 with a 9-4 record.

Michael Lorenzen will try to start this one properly on the mound.

The right-hander gave up a run and six hits in 5 2-3 innings, then the game was suspended before lasting 13 innings the following day.

Since re-entering the rotation on May 26, he’s walked 4.89 batters per nine innings over seven starts.

The rookie made his major league debut on April 29 at home against Milwaukee and surrendered three runs and eight hits in five innings of an 8-3 loss. The scoring came on solo homers by Braun, Lind and the injured Khris Davis.