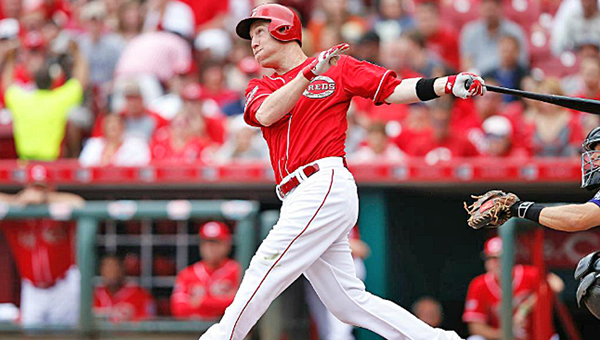 Cincinnati Reds’ third baseman Todd Frazier was voted to the National League starting lineup for the All-Star Game on Tuesday, July 14, in Cincinnati. (Courtesy of The Cincinnati Reds.com)

CINCINNATI — It was one of the greatest comebacks in Cincinnati Reds’ history, and it didn’t even involve a game.

Down nearly three million in the National League All-Star Game voting just three weeks ago, Cincinnati third baseman Todd Frazier came from third place to leap St. Louis’ Matt Carpenter and be named the starter for the July 14 game to be played in the Reds’ home ballpark.

Frazier said he was a little surprised that he was able to rally so late with such a wide margin to overcome.

“I was really nervous. I was excited. It was a huge comeback,” said Frazier.

“Definitely have a bunch of thanks to all the people, Lisa Braun and Jamie Ramsey, the whole Reds’ staff for coming through, and all the fans out there who took the time and effort because it’s tedious to do, but right now I’m pretty much on cloud nine how excited I am.”

Frazier was not shy about saying he not only wanted to be the starter but that he deserved it. A quick look at his statistics backed up his boast.

“I always have confidence in my abilities. Even if I’m doing bad, I always still feel like that next swing is the one that’s going to drive a run in or get a guy over, whatever I have to do,” said Frazier.

“I give props to my dad. He raised me the right way. Breed confidence. Always act like you’ve been there before and keep doing what you have been in the past.”

Reds’ manager said the fans did a great job making Frazier’s dream come true to start in his home ballpark, but he said it was more than deserving.

“It’s really a lot of good things happening and coming together. The fans of the Cincinnati Reds, the community here made a strong push for Todd to be voted in as the All-Star starter,” said Price.

“There’s no doubt he’d be selected, but I’m a big believer that those who deserve to start the game should be on the team. I feel he’s the best third baseman in the National League and the most deserving to start the game. If he was in another city, he deserved to start.”

Frazier made the All-Star team for the second straight year, but he said getting to start was his goal since the game was going to be played in Cincinnati.

“It’s unbelievable. To think back when you were younger and playing with your brothers and I always thought those two were going to be the all-stars because I always looked up to them and now I’m the all-star a second time,” said Frazier.

“Now they’re excited, ecstatic to be honest with you. It’s hard to talk about. You give as many thanks as you can. You thank your family, but the hard work you put in during the off-season and during the year means a lot to me and a lot to my family.”

Frazier is the first Reds’ player to start the All-Star Game since 2013 when Joey Votto started at first base and Brandon Phillips at second base.

“We definitely have a lot of guys of all-star caliber, and Todd’s the guy Cincinnati rallied big time to get him in.”