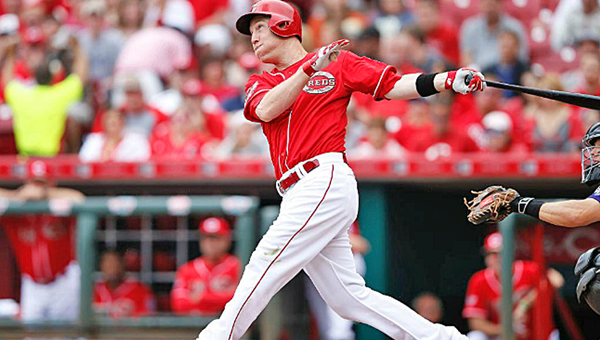 Cincinnati Reds’ third baseman Todd Frazier will not only be starting in Tuesday’s Major League Baseball All-Star Game, but he has been chosen to compete for the National League in the annual Home Run Derby on Monday. (Courtesy of The Cincinnati Reds.com)

NEW YORK (AP) — The Reds’ Todd Frazier is paired with two-time champion Prince Fielder of Texas in the first round of Monday’s All-Star Home Run Derby in Cincinnati.

In this year’s new format, Chicago Cubs rookie Kris Bryant is in a pairing with the Los Angeles Angels’ Albert Pujols, Toronto’s Josh Donaldson is in a bracket with the Chicago Cubs’ Anthony Rizzo, and Los Angeles Dodgers rookie Joc Pederson takes on Baltimore’s Manny Machado.

The Frazier-Fielder winner faces Donaldson or Rizzo, and the Bryant-Pujols winner goes against Pederson or Machado.

Brackets were based on season home run totals through Tuesday.

Each batter gets five minutes per round, and home runs in each batter’s final minute stop the clock. Players can earn up to 1 minute, 30 seconds of bonus time based on home run distance.

Bryant said his father, Mike, will throw to him. Mike Bryant taught Kris to hit at a young age, passing along the lessons he learned from Ted Williams during the two spring trainings he was a Boston Red Sox farmhand in the early 1980s.

“I’m probably doing it more for him so he can experience it with me,” Kris Bryant said Wednesday. “We always talked about it growing up and now it’s here.”

Bryant thinks Rizzo may have an advantage at Great American Ball Park.

“Cincinnati’s a pretty good left-handed hitter’s ballpark,” Bryant said. “Hopefully, I win it, but if he wins, that’s great, too.”

Fielder won the derby in 2009 and 2012. He will be participating for the sixth time, matching Barry Bonds and Sammy Sosa, and trailing only Ken Griffey Jr. and Mark McGwire.