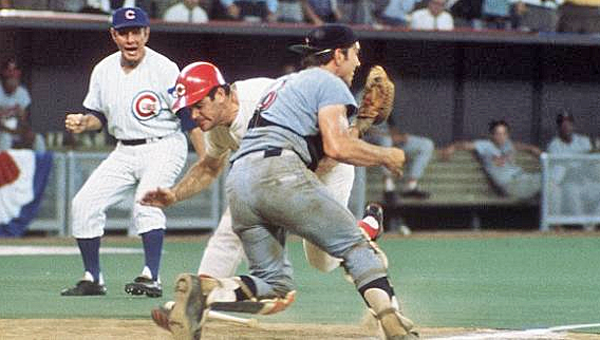 Cincinnati Reds’ great Pete Rose runs over Cleveland Indians’ catcher Ray Fosse to score the winning run in the 1970 All-Star Game to give the National League a 5-4 win in the 12th inning. The game was held at Riverfront Stadium in Cincinnati. (Courtesy of The Cincinnati Reds.com)

He never did fully recover physically from one of the most infamous plays in All-Star Game history, when Pete Rose bulled him over in 1970 to score the winning run in the 12th inning at Riverfront Stadium.

With the game back in Cincinnati on Tuesday, Fosse is reminded again of that moment. Over and over. Not that he needs another look.

“As if it happened yesterday,” said Fosse, a Cleveland catcher at the time and now an Oakland broadcaster. “As much as it’s shown, I don’t have to see it on TV as a replay to know what happened. It’s fresh.”

That night changed his career.

“It seems to be a play that people kind of relate to, that will somehow be kind of an opener, an icebreaker,” he said. “It’s like, ‘Oh, you’re the guy.”’

To this day, he introduces himself to A’s players as “just Ray Fosse, one of the broadcasters.”

Later, they tend to figure it out.

Fosse has pain and arthritis, endured five knee surgeries has two bum shoulders he never had fixed and a stiff neck.

In fairness, he knows a lot of that is a result of the rigors of being a catcher.

“My body hurts. My shoulder still hurts,” he said. “There was not anybody at the time to say, ‘Don’t play.’ I continued. That’s something that I take with a lot of pride.”

Fosse recalls it being 160 degrees on the artificial turf that night in Ohio, when the AL blew a 4-1, ninth-inning lead and lost 5-4 on Rose’s run. Rose says Fosse left him no room to slide into home on the decisive play.

“He’s the one blocking the plate without the ball,” Rose said on Thursday. “I’m the one who missed three games with an injury to my knee. He played nine more years after that.”

Two days after the All-Star Game, Fosse caught nine innings in a win at Kansas City. He couldn’t lift his arm above his head.

“They didn’t have the technology, I didn’t see any of it, as far as X-rays, no MRI, not really anything,” Fosse recalled in May at the Oakland Coliseum.

“Since my salary was about $12,000 at the time, nobody was going to tell me I couldn’t play. Even though I was hurt and probably shouldn’t have played, there was no injury that actually showed. It just was internal. As it turned out it was a fractured, separated shoulder. Things were different then.”

Fosse “never had the ball, never touched the ball” when Rose came plowing into him at the plate.

Now 68, Fosse offered his support after Giants catcher Buster Posey got run over by the Marlins’ Scott Cousins in May 2011, which in part led Major League Baseball to implement a new rule last season banning such home-plate hits.

Fosse spent parts of 12 seasons in the majors. He made the All-Star team again in 1971, yet his best year was already behind him.

And, really, there was a lot to enjoy in that 1970 showcase.

Fosse had a single, scored a run and drove in one. Like Rose, he entered in the fifth inning as a substitute.

All most fans recall was that bruising end.

“That’s something people will continue to talk about, whether they were alive at the time or watched the video and see the result,” Fosse said.

“There have been some harder hits. Just the fact it was an All-Star Game, they always vote on the All-Star game highlights or lowlights and that always seems to be at the top that people talk about.”

Rose has said he and Fosse were out until 4 a.m. Fosse insists he and his wife of three months, Carol, had dinner with Rose, his wife, Carol, and Fosse’s Cleveland teammate Sam McDowell and his wife, also Carol. The Fosses were back to their hotel room by 1 a.m.

“There have been a lot of things that have been said over the past years that really have never come out truthfully to some extent,” Fosse said. “The thing that really bothers me, and that’s been ongoing for my kids, our kids, Pete always said, ‘Ray and I were out till 4 o’clock in the morning.’ It’s like he’s always forgotten the real situation that there were six of us there, including all of our wives.

“We had dinner and he said, ‘All I want to talk about is Johnny Bench,’ which obviously we did because he was my contemporary in the National League.”

During a conference call on Thursday to discuss Fox Sports’ coverage of the All-Star Game, Rose bristled at a suggestion that the play ruined Fosse’s career.

“No. 1, I didn’t break the rules,” Rose said. “Two, I did not try to purposely hurt him. Three, I did not ruin his career. Four, I took him out to eat the night before the game.”

Fosse had a 23-game hitting streak in the first half, at age 23. He hit 16 home runs before the break and just two the rest of the season.

Has he wondered how his career might have turned out if Rose had taken a different path?

“We probably wouldn’t be talking now,” Fosse said, chuckling. “From a pure baseball standpoint, I really haven’t thought about it that much. All I know is that having hit 16 home runs at the All-Star break, could I have hit 30? Could I have hit 30 annually?”

To this day, the roster from that All-Star Game is bookmarked on his computer.

“I wouldn’t change a thing,” Fosse said. “Long after I’m gone, I’m sure they’ll still be showing the play. It’s part of the great game and I would never, ever say there’s any animosity or hard feelings about anything, about playing a game that I loved and still love.”

MIAMI (AP) — Cincinnati Reds rookie Michael Lorenzen was braced for a pitching duel against Jose Fernandez, which is what... read more