Loss of Davis is heaven’s gain 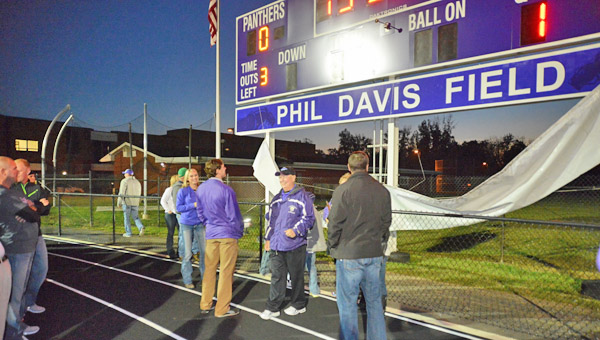 Former Chesapeake Panthers’ Hall of Fame football coach Phil Davis died on Friday at the age of 69. Chesapeake held a dedication ceremony in 2013 by naming the field in his honor. Davis is standing under the sign in his honor. (Kent Sanborn of Southern Ohio Sports Photos.com)

God is all-knowing, so He knows what He has just done. And since God is all-loving and all-forgiving, it’s understandable what he’s done.

God decided it was time to bring Phil Davis back home. The former Chesapeake Panthers’ Hall of Fame football coach died Friday after an extended battle with cancer. He was 69.

Those who know Phil Davis know very well what I’m talking about. Now God is going to have to listen to all those fishing stories.

Coach Davis was filled with energy. He was the head coach in football, wrestling and track during his 22 years at Chesapeake. He coached the same three sports at his alma mater at Buffalo, W.Va., where he began his career in 1972.

He never grew tired of coaching because he just wanted to teach young men. Coach Davis once said, “It’s been 34 years of 12-hour days and those are the short days. You might think that should be enough, but I’ve enjoyed every minute of it.”

Or maybe he just couldn’t relax because of the abundant energy that filled his body and soul. And anyone who knows him can tell you that he relaxed by going fishing and that could be at any time of the year, not just during a summer vacation.

And he loved to drag as many people along with him on his fishing expeditions. However, the only thing he loved more than teaching fishing was telling fishing stories.

After retiring a few years ago, he made an appearance at a track meet and the conversation quickly went from “how are you doing” to “we just got back from a fishing trip and you’ve got to hear what happened.”

That conversation starter was used hundreds of times with coach Davis.

The Panthers were never known for their football and posted records of 2-8, 1-9 and 0-10 in the three seasons prior to Davis’ arrival.

Always a class act, he was able to use that abundant energy and infectious smile to produce eight Ohio Valley Conference titles — Chesapeake has only three other football titles — and his teams qualified for the postseason seven times.

Because of his efforts and success, Chesapeake named the football field in his honor in 2013.

“I’ve always felt there were two kinds of coaches. You take over a program that’s not doing well and it does better but the schedule gets tougher because of your success and then you go somewhere else,” coach Davis said upon his retirement.

“Then there are those (coaches) that hang around because they feel a loyalty to their kids and you hope there’s some loyalty the other way. You build something and maintain it. I wasn’t looking to change jobs the first time, but it was an opportunity I couldn’t pass up. I knew it would be a struggle.”

The biggest reason Davis was able to coach so many sports for such an extended period of time was due mainly to one person: Helen, his wife of 47 years.

When he retired, coach Davis said, “my wife has been wonderful the whole time. We may have problems now that I’ll be around the house more.”

That wasn’t going to happen because all she had to do was hand him his fly rod and tell him to go fishing.

After listening to all coach Davis’ stories, I can see God doing the same thing.

MIAMI (AP) — By one measure, the Reds endured their worst inning since 1961. Cincinnati happened to reach the World... read more