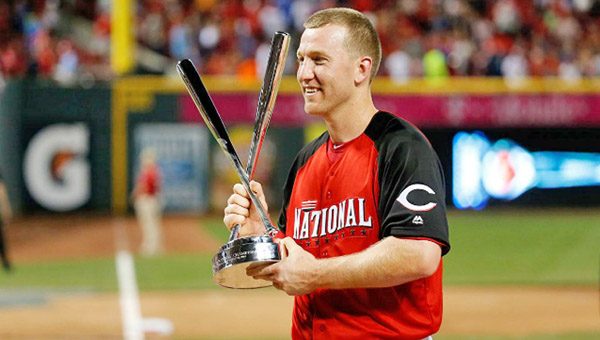 Cincinnati Reds’ third baseman Todd Frazier celebrates with his trophy after winning the Gillette Home Run Derby presented by Head & Shoulders on Monday. Frazier — who was the runner-up last year — beat Joc Pederson of the Dodgers in the finals to win the event in front of his hometown fans at Great American Ballpark in Cincinnati. (Courtesy of The Cincinnati Reds.com)

The Jersey boy who never seems to get rattled waited until his very last swing — three times, no less — to win the All-Star Home Run Derby in his home ballpark on Monday night.

Pressure? Sure didn’t show it.

The Reds third baseman became only the second player to win the long-ball competition on his home field Monday night, topping Dodgers rookie Joc Pederson 15-14 with another late surge and one last perfectly timed swing.

“No pressure here with these fans,” he said, after accepting the crossed-bats trophy to one more standing ovation at Great American Ball Park.

Frazier joined the Cubs’ Ryne Sandberg for home-field homer titles — the Hall of Fame second baseman did it at Wrigley Field in 1990. After finishing second last year in Minneapolis, this one was as sweet as that winning swing.

“That pushed me a lot,” Frazier said. “I wanted to get back here. I’d been working in the offseason a little bit. I’m just glad it was in Cincinnati and they could enjoy it with me.”

Pederson was trying to become the first rookie since Wally Joyner in 1986 to win or share the title. He reached the final round by knocking off Albert Pujols, who provided a blast after making the All-Star team for the first time in five years.

“I’m happy for Todd, especially being able to do it in front of his fans,” Pujols said. “It’s his night. He deserves it. I just hope the fans were pleased and happy with the performance every single guy did. The right guy won, too.”

Frazier topped Prince Fielder and Josh Donaldson to reach the finals, where he faced his biggest test. Pederson went first and matched the highest total of the night with 14 homers. Frazier needed a late surge to pull even, tying him with 11 seconds left in his round.

He’d hit enough long homers to earn an extra 30 seconds, giving him a chance to take a few deep breaths, regroup and refocus.

On the first pitch from brother Charlie in extra time, Frazier puffed his cheeks and exhaled as he hit one solidly, then mouthed the words “That’s gone” as the ball headed for the left field stands. The ballpark was full of fans with arms raised even before the ball landed.

“It was a great environment,” Pederson said. “It was extremely humbling being out there with Prince Fielder, Albert Pujols and Josh Donaldson.”

And, of course, it ended with a little more Sinatra.

Frazier uses “Fly Me To The Moon” as his music when he walks to the batter’s box during games, and it greeted each of his rounds on Monday. When he’d clinched the title, the ballpark rocked with “I Did It My Way.”

“I had no clue they were going to do that,” Frazier said. “That was pretty nice.”

With that, Frazier made it an All-Cincinnati All-Star event so far. Cubs catcher Kyle Schwarber, a Reds fan who grew up in nearby Middletown, Ohio, was the MVP of the Futures Game on Sunday with a two-run triple.

Frazier had been gearing up for the derby all season. He faded badly last year in Minneapolis, reaching the finals before losing to Yoenis Cespedes 9-1. He was so worn out that he could barely hit one at the end, and he planned to pace himself better this time.

He hung in there and added to his lore for big home runs.

Frazier was a member of the 1998 Toms River team in New Jersey that beat Japan for the Little League World Series championship. He had a homer among his four hits in the clinching game.

He loves hitting at Great American Ball Park, which has been one of the majors’ most homer-friendly places since it opened in 2003. He ranks among the major league leaders with 25 home runs this season.

There was speculation that one of the All-Stars might knock one into the Ohio River beyond right field — Adam Dunn is the only one to reach it so far.

No splashdowns. Plenty of drama, though.

Frazier had a tough challenge right away. Fielder was trying to join Ken Griffey Jr. as the only three-time derby champions. Junior watched from foul territory after throwing a ceremonial opening pitch to his father, Ken Sr.

And Fielder wowed ‘em, hitting 13 homers — eight of them farther than 425 feet, with one estimated at 474 feet. The home crowd groaned collectively as Frazier came to bat and got off to a very slow start. He called timeout to catch his breath after struggling to hit his first five homers.

He caught up with 5 seconds to go in his allotted time, then connected again on his first swing of extra time to move on.

And there was no stopping him.

Seeding in parentheses based on 2015 home run totals through July 7th.

Five minutes per batter, per round.

Ties in any round will be broken by a 90-second swing-off with no stoppage of time or additional time added; if a tie remains after the swing-off, batters will engage in successive three-swing swing-offs until there is a winner.

Each batter entitled to one 45-second “time out” per round.

CINCINNATI (AP) — Not too long ago, Mike Trout, Bryce Harper and Gerrit Cole were the ones picking up the... read more